Cadillac has kept everyone guessing with the secrecy surrounding their new range of SUVs. While they still haven’t given out much info, some of the recently released visuals make for a telling tale.

General Motors teased fans with a video as it announced its Cadillac Escalade SUV line. It is the first SUV to be branded with the high-performance V-series badge. Further information, including details of the vehicle specs, will be released in the spring of 2022. 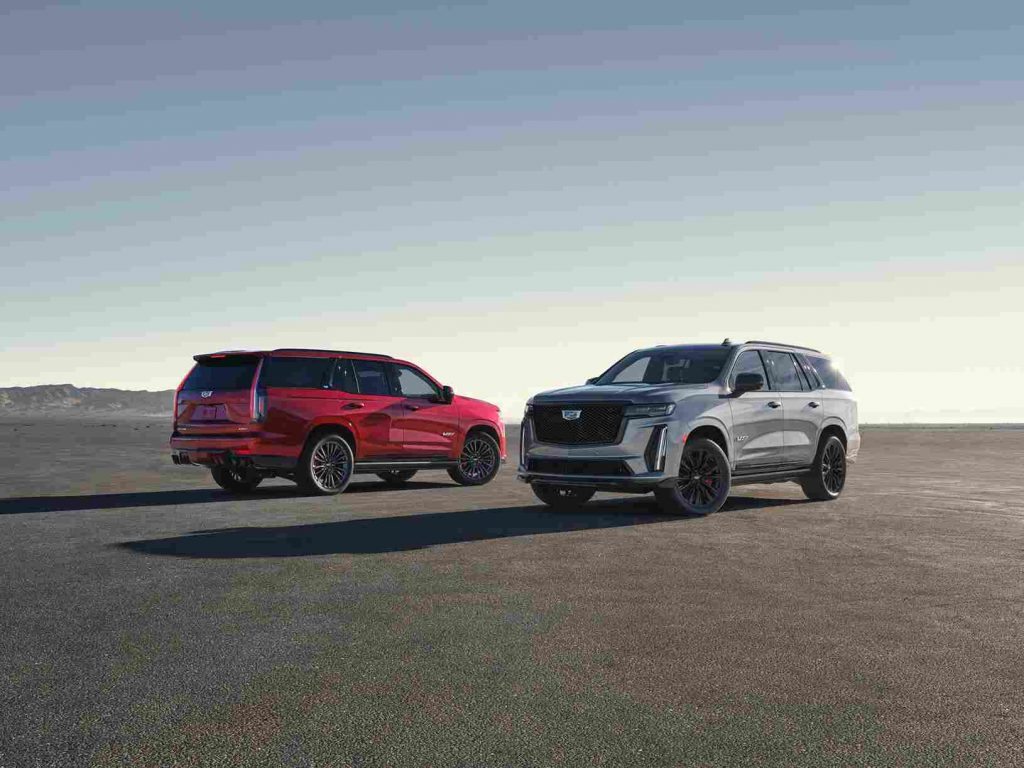 The Cadillac Escalade V-Series SUV is sure to take your breath away.

On January 21, 2022, GM stated, “With nearly two decades of racing-inspired prowess, the V-Series designation is reserved for vehicles that encompass the peak of Cadillac performance, bold, distinguished design, and innovative technology.”

Although the new Cadillac Escalade SUV resembles its predecessors, it is expected to be more powerful and fierce. The videos released by the automaker show a mean machine designed to rule over every terrain. It reveals a stunning SUV with a new mesh grille and a revised lower bumper. The running lights, too, have a classier, sporty design. Cadillac aptly captioned the video “Power has a sound – and it’s a roar.”

There is not much to go on about the interiors, but the steering seems to have been stamped with the distinguished ‘V’.  There is also a ‘V’ badge on the front fenders and on one of the spokes. With regard to the engine, it is expected to have the V-8 6.2-liter engine just like the new CT5-V Blackwing sedan. It is capable of generating 668 horsepower and 659 foot-pounds of torque. The wheels seem to be the classic 22-inch Escalade set with Bridgestone tires.

Rumors abound that the Cadillac will provide fresh updates to the Escalade’s adaptive air suspension and Magnetic Ride Control dampers. Fans are also hoping for body-hugging sport seats and a sporty steering wheel on the Cadillac SUV.

An official statement by the company read, “More information about the 2023 Cadillac Escalade V-Series, including full vehicle specs, will be revealed in spring 2022.” Further down the line, Cadillac is also expected to roll out a battery-electric version of the Escalade.

Meanwhile, in sedans, the official website mentions that reservations are full for the 2023 Cadillac LYRIQ Debut Edition. It has been described by the company as, “Inspired by architecture, the cantilevered design of the Cadillac LYRIQ center console features a modern, floating front edge and a jewel-like rotary dial.” The car is expected to be available in early 2023, with production beginning in late 2022.

In December 2021, General Motors Chief Financial Officer Paul Jacobson shared that the automaker expects its profits to rise to $14 billion in the coming year. He mentioned that GM has been able to keep an optimistic outlook because of strong consumer demand, price hikes, and stability in the supply of semiconductors. However, he also tempered the enthusiasm by reiterating that GM’s inventories and vehicle production is expected to be back to normal only by late 2022. He acknowledged that they are struggling with rising inflation and the cost of commodities and parts.

General Motors is expected to fully transition to electric vehicles by 2035.

As the auto industry undergoes a transformation, whereby automakers shift their focus to sustainable energy, they are beefing up their current lineups to increase profit margins, and offer the best in gasoline-powered vehicles. Electric vehicles tend to offer high performance, but profit margins can be substantially lower in comparison to their fossil-fueled peers.

Christy Gren
Christy Gren is an Industry Specialist Reporter at Industry Leaders Magazine she enjoys writing about Unicorns, Silicon Valley, Startups, Business Leaders and Innovators. Her articles provide an insight about the Power Players in the field of Technology, Auto, Manufacturing, and F&B.
« We’re in the end of a ‘superbubble,’ says Jeremy Grantham
Google’s Online Services Team Grapples with Mental Health Crisis »
Leave a Comment
Close