What if plants could not only help in getting rid of the pollution from the environment but also save energy? It seems like Massachusetts Institute of Technology has come up with a solution that could kill two birds with one bullet. Or, let’s say save two birds with one invention. The engineers of MIT have been working on something along the lines of glowing plants which spreads light in the darkness.

The concept of plants giving light is not new as such. Such a venture was promised by Kickstarter campaigns for years. Startups like Bioglow and Glowing Plants have gone astray. But, this doesn’t mean we are being skeptical about its success. In fact, since the MIT students will be backing up this project, we seem a little more hopeful.

It is said that there are specialized nanoparticles that have been embedded into the leaves of watercress plant. This causes the plant to glow for at least 4 hours. This means that that you could sit with it and do your reading for some time without consuming any electricity. 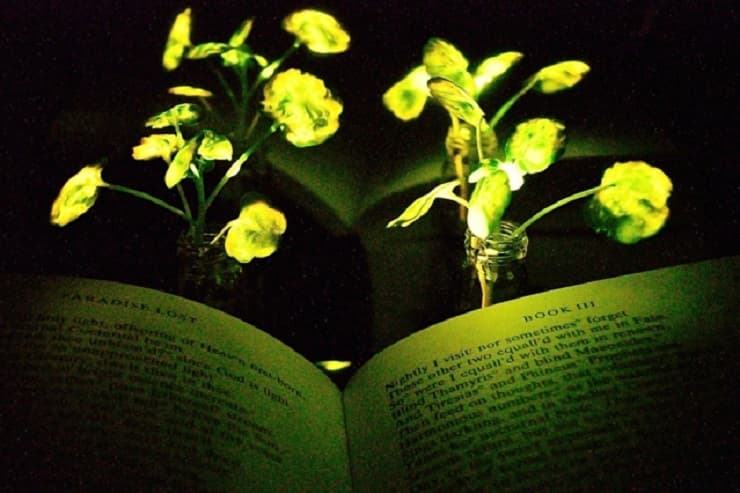 Specialized nanoparticles embedded into the leaves of watercress plant causes it to glow.

So is it official?

According to the chemical engineering professor at MIT and senior paper author Michael Strano, the light from the 4-inch watercress seedling is one-thousandth the light we require to read. It is not very bright, but by indulging in further optimization, they could eventually improve the brightness. “When those match, you’ll have the optimal usage,” Strano said. He further added, “If your reaction is too slow, essentially, you’ll have a lamp that’s too dim. If the reactions are too fast, then you’re wasting the fuel inside the plant.”

The research paper’s main aim is to reduce energy usage. According to the paper, lights account for the 20 percent of the worldwide energy consumption. The study team was led by postdoctoral researcher like Seon-Yeong Kwak and was published in Nano Letters.

According to Strano, he mentioned that the plants are doubly carbon negative. Carbon Negative is a phrase which describes something that removes more carbon from the atmosphere than one responsible for creating it. The plant works on the usage of an enzyme called luciferase. Luciferase is the same thing that makes fireflies glow. The luciferase in the plant is made to interact with another molecule dubbed luciferin. The two enzymes and molecule are then put into nanoparticles which are there in the plant. While one particle releases luciferin into the plant cells the other triggers a chemical reaction which causes the plant to glow.

Strano mentioned to Newsweek that plants are indeed an amalgamation of batteries as well as solar cell.  “They are really the combination of a solar cell and a battery,” Strano mentioned. Plants also easily adapt to any kind of natural environment and have the qualities of self-repairing. He said, “So, for example, if you leave your iPhone outside in the rain and in the cold and so forth, you have to make special engineering precautions to make sure it doesn’t break,”

If the research pans out fine, then every household would start not only keeping the environment in the house clean but make use of natural light. These glowing plants will surely find its way into every household and imagine the number of people who could benefit from it. Especially those who need light to work under.

The Competition and Markets Authority will focus on whether Amazon, Inc. favors merchants that use its delivery services.
1 day ago

Altice said it did not intend to make a bid for the British Telecoms company, though the takeover code also does not allow it to make an unsolicited buyout offer for six months wit
1 day ago

The world’s richest nations (G7) reached a landmark accord setting a global minimum corporate tax rate for multinationals. Would it be effective in tackling tax evasion and avoid
1 day ago

The Food and Drug Administration of the US approved on Monday Biogen Inc’s Aducanumab to treat Alzheimer’s disease amidst the controversy of its efficacy. Biogen has pr
3 days ago

Under UK Finance’s proposals, nine banks under investigation by the CMA would be obliged to fund a “future entity” for three years.
3 days ago