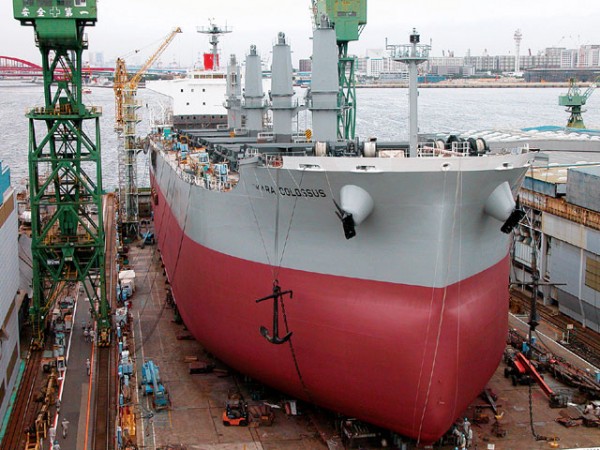 Rising from an industry previously dominated by Korea and Japan, China has emerged as the world leader in shipbuilding due to their lower costs of materials and labor. According to London-based market researcher Clarkson Research, China is the largest shipbuilder in the world in terms of compensated gross tons of ships as of 2010, at a total of 15.9 million tons, followed by South Korea with 11.77 million compensated gross tons.

In fact, there is plenty of speculation that China is preparing a series of huge ship orders, along with its growth in the shipbuilding industry itself. It was revealed yesterday that there’s been a  significant order from a Chinese buyer for new crude-oil tankers. That order, along with the speculative orders, would support employment in the country’s shipbuilding industry but flood struggling shipping markets with excess capacity. China Rongsheng Heavy Industries, China’s largest privately controlled shipbuilding group by order book size, announced yesterday that it had received an order for 10 Suezmax crude oil tankers, plus options for a further 10, for delivery in 2013 and 2014.

Despite the fact that the Eurozone Crisis is hitting South Korea’s shipbuilding industry pretty hard, South Korean shipbuilding stocks may jump as much as 80 percent in four months as they catch up with gains in oil prices. The slowdown in the shipbuilding industry as a whole may affect Korean shipyards less than those in China as shipbuilders including Hyundai Heavy, Samsung Heavy and Daewoo Shipbuilding, South Korea’s three largest, have pared their reliance on these traditional markets by focusing more on energy-related products. South Korean yards may win more sales from energy products than ships for the first time next year, according to NH Investment & Securities Co.

How’s the Shipbuilding Industry in Europe Holding Up?

The shipbuilding industry in Europe is doing its best to keep up with the global competition. The Baltic Exchange’s main sea freight index, which tracks rates to ship dry commodities, has so far fallen 14 percent over the past year. This week, the European Union unveiled new rules for assessing aid to the bloc’s shipbuilding industry, hailing the reform as intended to help foster innovation. These new rules will go into affect at the beginning of 2012. Europe’s shipbuilding industry includes over 300 shipyards with a combined turnover of 30 billion euros a year and employing some 500,000 people.