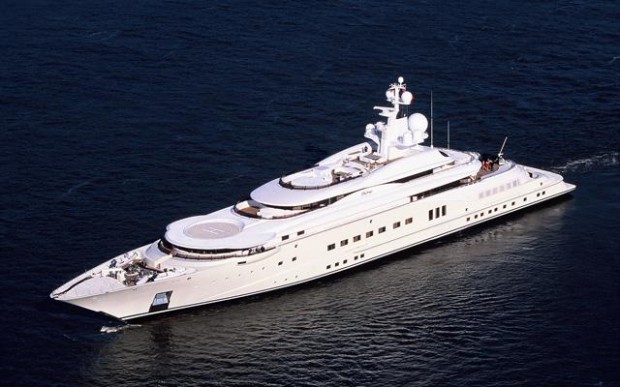 Eclipse, the most expensive yacht in the world

You’ve got that fantabulous house with acres of backyard, an awesome Lamborghini sitting in your driveway, gadgets galore, what do you aspire for next?

A really awesome Yacht, you say?  We concur.

Like a popular ad goes, “Free man, You will always love the Sea”.

Luxury yachts have since time immemorial had this incredibly high “I’ve arrived” quotient.

So we asked our magic mirror, “which yachts are the most luxurious of them all?” Here goes a list of the 5 hottest machines that make the most of the ocean’s magic.

Revealed to the world on June 12th, 2009, the Eclipse is proudly owned by Romah Abramovich, a Russian businessman, the primary owner of the investment company Millhouse LLC, owner of the Chelsea Football Club, and according to the 2011 Forbes list, the 53rd richest person in the world worth a personal fortune of $13.4 billion.

As for his awesome set of sails, the Eclipse, at 528 feet (164 metres), is the world’s largest. What else does the Eclipse offer ? You name it, they’ve got it. From hot tubbing to helicopter pads (of which the Eclipse has 2), from a disco hall to swimming pools (again, this luxury yacht has 2 of these), guest rooms (obviously) with 6-foot movie screens installed in each of these, 3 launch boats and even a mini submarine with a capability of submerging upto 50 meters.

Built by the world’s best-known yacht builders, German company Blohm + Voss, and operated by 70 crew members, defense and security have been very carefully considered while designing this uber-luxurious yacht. The Eclipse has an intruder detection system as well as a German-built missile defense system built in.

And you thought missile-systems built into yachts and cars only happened in Bond movies? Please!

As if that’s not good enough, the Eclipse is also reported as being equipped with an “anti-paparazzi” shield. The yacht has a stream of lasers sweeping the surroundings and when they detect a CCD, they fire a bolt of light right at the camera to wipe out any photographs that might’ve been taken.

And while these are believed to not be on all the time, they supposedly get activated when guards spot any paparazzi hanging around this highly ostentatious piece of machinery.

Nowhere close to the super awe-inspiring Eclipse, Dubai, is quite a feat in its own right. Owned by Sheikh Mohammed bin Rashid Al Maktoum, the ruler of the Emirate of Dubai and the Prime Minister of the United Arab Emirates, this luxury yacht is 524 ft and 10 inches (162 m) long.

Formerly known as “Panhandle” and “Platinum”, this luxury yacht has also been built by Blohm + Voss, builders of the Eclipse.

Usually anchored at the artificial island “Logo Island“, immediately offshore from the Sheikh’s summer palace, and to the right of Palm Island, the Dubai can be accessed by way of an exclusive navigational channel.

With interiors designed by Philippe Starck, the Dubai is run by 88 crew members, can host 115 guests, and has a large pool, a squash court, a helipad and also a small aircraft hanger: after all, the Dubai’s owner DOES rule the Emirate of Dubai, doesn’t he? 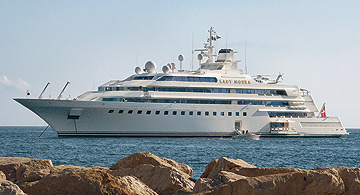 lady moura, third most expensive yacht in the world

This superyacht, owned by Saudi Arabian businessman Nasser al-Rashid, was also built by Blohm + Voss, in 1990, much before the Eclipse.

Smaller of course than the Eclipse and Dubai, Lady Moura is operated by 60 crew members, and as its special feature, boasts a mock of beachfront complete with sand and palm.

I wouldn’t say no to that…

As an added attraction, it also has a pool with retractable roof.

Originally purchased by Larry Ellison, CEO of Oracle Corporation, and currently owned by David Geffen, the Rising Sun was designed by the late Jon Bannenberg and built by Germany’s Lürssen.

This 453 feet long luxury yacht boasts a total living space of 8 000 square meters, alongwith other modest (!) facilities like a huge indoor swimming pool, an extensive wine cellar, a cinema, a basketball court that doubles as a helicopter pad , suites for 16 guests, 82 rooms on five storeys and space for a private submarine

This mega yacht, featuring fifth on our list, is owned by Paul Allen, the co-founder of Microsoft.

With 40 eager-to-serve crew members, this 416 foot sailing beauty also doubles up as a “garage” of 7 smallers boats, two helicopters and a 10 person submarine.

Built by the same guys who built the Rising Sun, Lürssen, the interiors for the Octopus were designed by Jonathan Quinn Barnett from Seattle.