Get ready to fly along iPad Air 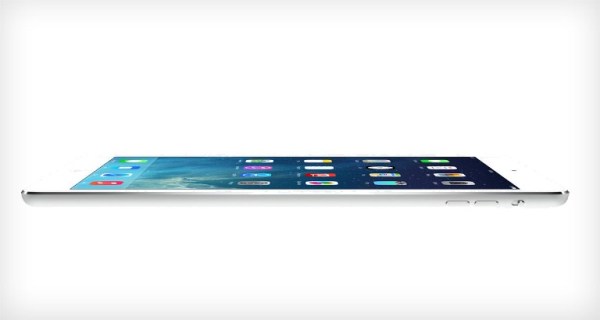 If you are planning to get any new fancy gadgets for this holiday season, you definitely have to check out the new Apple for your gift’s list. Phil Schiller, senior vice president of worldwide marketing at Apple Inc., presented the next toy for your collection at yesterday’s Apple’s latest launch event in San Francisco. No, it is not iPad 5, it is iPad Air.

Honoring its name, this light tablet weighs just one pound (down from the fourth generation model’s 1.4 pounds). It also shows off a 43-percent thinner bezel and a 20-percent thinner profile; being 7.5mm thick.

As its predecessor, iPad Air sports a 9.7-inch Retina display, with a 2048-by-1536 resolution and over 3.1 million pixels. It has a 64-bit architecture with more than 1 billion transistors, as well as an A7 processor underneath its aluminum unibody design, along with an M7 motion chip. For those who look for fast and smooth web navigation, this device is eight times faster than the first generation iPad, according to Schiller, and graphics are 72 times faster.

Furthermore, with this Apple’s latest launch you will be able to enjoy a high-speed WiFi thanks to MIMO (Multiple-Input-Multiple-Output), a wireless technology that uses multiple transmitters and receivers to transfer more data at the same time. Even better, this new fancy gadget supports plenty of LTE bands to connect to a wide range of cellular data networks around the globe, so that you can get on line even when there is no WiFi signal.

For picture lovers, its 5-megapixel iSight camera is capable of shooting 1080p video, and its FaceTime camera on the front includes a backside-illuminated sensor to increase image quality. Additionally, the light tablet comes with dual microphones and has a battery life of about 10 hours.

A great advantage of this new gadget is that it comes with free apps such as Pages, Numbers,  Keynote, iMovie, GarageBand, and iPhoto, which will allow you to do things from composing documents to editing your own fancy movies.As experts and fans had quickly pointed out, this lighter iPad version does not include the TouchID fingerprint sensor that debuted on the iPhone 5.

iPad Air will be available in the United States on November 1st and will ship to several countries, including United Kingdom, Japan, and China. Notably, this is the first time that China will get the latest  iPad on Apple’s launch day, probably due to the fact that this country represents a key growth region.This fresh light tablet starts at the familiar $499 price point, for the 16 GB model.

Anna Domanska
Anna Domanska is an Industry Leaders Magazine author possessing wide-range of knowledge for Business News. She is an avid reader and writer of Business and CEO Magazines and a rigorous follower of Business Leaders.
« Ultra HDTV models by Apple till the end of 2014?
Ford Survives and Sustains its Position in European Car Market »
Leave a Comment
Close