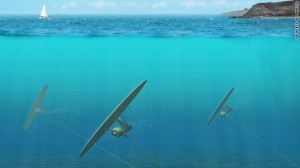 Minesto, the Swedish tidal energy device developer, has revealed its latest technology for producing clean energy: the use of underwater kite turbines.

This new technology, called Deep Green, is capable of operating in slower currents, while other comparable systems are able to operate only in faster currents.

The Carbon Trust will provide £350,000 ($570,000) for trials off the coast of Northern Ireland. The first sea trial is due to be carried out in Strangford Lough in Northern Ireland this summer.

Minesto’s device, in form and function both, very much resembles a kite or a small plane flying underwater carrying a turbine through the sea current while being tethered by a cable to the sea bed. It swoops round in a figure-of-eight shape to increase the speed of the water flowing through the turbine tenfold, just as sailing boats cut across the wind to go faster.

Minesto said that these kite-like structures, all of which are linked to the seabed, also accelerate the speed of the water entering the turbine by up to ten times. This way, more energy is generated.

The underwater kites at full size will have a wingspan of 8-14 metres.

Harnessing the power of the sea 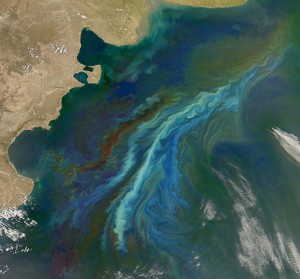 harnessing the power of the sea by underwater kite turbines

Swooping a turbine through the sea’s currents could be a cheaper way to harness the power of the oceans, given the nature of technology being developed by Minesto.

The ability of the underwater kites to accelerate the speed of the water entering the turbines they carry means that the kites would be able to generate renewable electricity in tidal streams that would be too slow to drive the first-generation tidal devices, such as the SeaGen turbine also installed in Strangford Loch.

The kite has neutral buoyancy, so doesn’t sink as the tide turns and the turbine mouth is protected to stop fish flying through.

Minesto’s managing director, Ander Jansson, revealed that the kites will work in flows of 1-2.5 metres per second, while first-generation devices need over 2.5m/s. Depending on the location and size of the kites, each will have a capacity of between 150 and 800kW, and be deployed in waters 50-300m deep.

Stephen Wyatt, a marine energy expert at the Carbon Trust, says devices such as kites that exploit lower speed tidal currents would expand the UK’s tidal resource by 16%, meaning it could supply about 1% of the UK’s current total electricity needs.

Given that one per cent of the UK’s electricity is enough to power an entire city the size of Newcastle, this development offers a significant boost in the field of clean energy generation.

Potential hurdles in the process?

Wyatt from the Carbon Trust says installing the devices is one of the hardest steps. A boat has to get in to drill the foundations in the sea bed for the cable that would allow the kite to fly underwater, and deploy the kite during the short time while the tide is slack.

Jansson from Minesto says the key challenge will be getting the technology to commercial viability, where it can compete on cost with other ways of generating electricity. He suggests making and installing two turbines, with a joint capacity of 1MW, could cost £1.8-£2m, though he expects fleets of kites to be deployed to benefit from economies of scale.

“The sea is an extremely tough environment and I think this is why the sector has taken some time to develop,” said Jansson, speaking from the Renewable UK Wave and Tidal conference. “But it is really starting to kick off now.”

As of 2021, over 150 million US workers identified themselves as self-employed. This means that they are responsible for their own retirement plans. Employees of big firms tend to
37 mins ago

Just shy of her 40th birthday, Vera Wang struggled to find a bridal gown that suited her taste. Her father pointed out her struggles for what they really were – a remarkable busi
37 mins ago