Finally! It’s been nearly two weeks since General Electric promised to reveal the identity of the companies from which it will buy 23,000 electric cars for its corporate fleet. But I doubt that many investors will mind the wait — because as it turns out, GE used the extra time to increase the size of its purchase.

Thursday night, GE announced that its initial buy-in to the Electric Revolution will total approximately 25,000 cars. Beginning next year with the first tranche of a 12,000-Volt purchase from soon-to-IPO-General Motors, GE will gradually up its purchases over the next five years. To obtain 25,000 vehicles, GE will also probably need to expand the list of vendors to includeNissan’s Leaf, Ford’s electric Focus and Transit Connect van, and/or the RAV4 that Toyota is developing in cooperation with Tesla Motors.

Why would GE spread its bets, and its wallet, so widely? Well, consider: GM tells us it aims to produce just 10,000 Chevy Volts in 2011, while its rivals plan similarly slow ramp-ups. So GE really has little choice in the matter — buy too many cars from any one manufacturer, too quickly, and it would clean out the company’s inventory instantly.

On the other hand, by giving a lower level of buying support, spread out over time and across the industry, GE will support the development of an electric infrastructure — an infrastructure that GE itself aims to dominate. Already, GE owns a 10% stake in car-battery maker A123. It also has a hand in the business of charging those batteries, through its WattStation car charger. With other companies already dipping their toes in the electric water (ouch!) — FedEx is buying eStar electric vans from Navistar, PepsiCo’s on the hook for more than 100 electric trucks fromSmith Electric, and the list goes on — it’s only natural GE should want to service this market.

And, in fact, GE’s buy-in has already expanded the market. To make up for the number of Volts that GE is claiming, GM says it may up its production rate as needed, to ensure that GE’s move “won’t reduce the number of Volts available to the public.” I think it’s a safe bet GE’s other soon-to-be-suppliers will respond similarly. What’s more, GE management tells us that its various electrical ventures stand to send $0.10 back to the company for every $1 worth of electric cars sold worldwide.
Shockingly good news for GE shareholders. 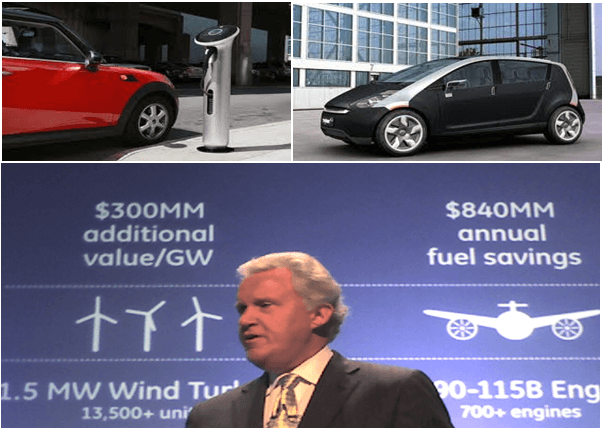