Opened in 900 AD, Sean’s Bar is the Oldest Bar in Ireland 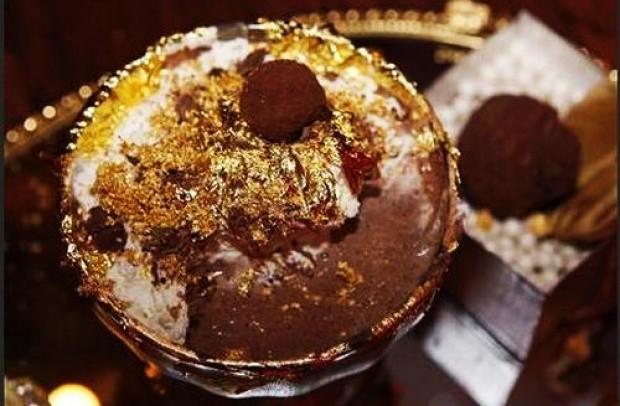 This one is for all those of you who cannot resist a deliciously blended scoop of cold delight.

The Frozen Haute Chocolate, (right) made by New York City eatery, Serendipity 3 and priced at a mind-blowing $25,000 has claimed a spot in the Guiness World Records as The World’s Most Expensive Dessert.

Made from a blend of 28 cocoas from across the world, this decadent delicacy is infused with five grams of edible 23-karat gold and served in a goblet lined with edible gold. Serendipity 3 teamed up with jeweler Euphoria New York to create this amazing dessert.

Topped with whipped cream, more gold and a side of La Madeline au Truffle from Knipschildt Chocolatier, which sells for $2,600 a pound, the dessert comes with an 18K gold bracelet with a carat’s worth of diamonds that rests at the base of the goblet and a gold spoon set with white and chocolate-colored diamonds.

Founded by Stephen Bruce in 1954, Serendipity 3, or Serendipity III, is a popular restaurant in the Upper East Side of Manhattan, and has also featured in a number of Hollywood movies.

Named after “the art of finding the pleasantly unexpected by chance or sagacity”, Serendipity 3 has often created delicious recipes in celebration of landmark events.

A recent example is the Zarkana Sundae, dished up by the NYC eatery to celebrate the World Premiere of Zarkana, the major new acrobatic spectacle from Cirque du Soleil at Radio City Music Hall. This World Premiere took place on June 29, 2011 and performances will be held right through until October 2011.

The Zarkana Sundae created by Serendipity 3, unveiled by Zarkana characters in full show costume and make-up, will be available exclusively at Serendipity 3 for a limited time.

A red “deco” style goblet filled with vanilla and chocolate ice cream constitute the base of the delightfully grand Zarkana Sundae, then drenched in both white and milk chocolate sauces.

Apple is bolstering its smart home devices space with the introduction of a new hybrid device— a combination of an Apple TV and a smart speaker with a screen, according to news r
4 hours ago

One of the most trusted pioneers of technology in the automotive sector, Toyota Motor Corp. has finally revealed the future of the EV segment by showcasing its new SUV, encompassin
4 hours ago