Forget the flat screen and get curved! 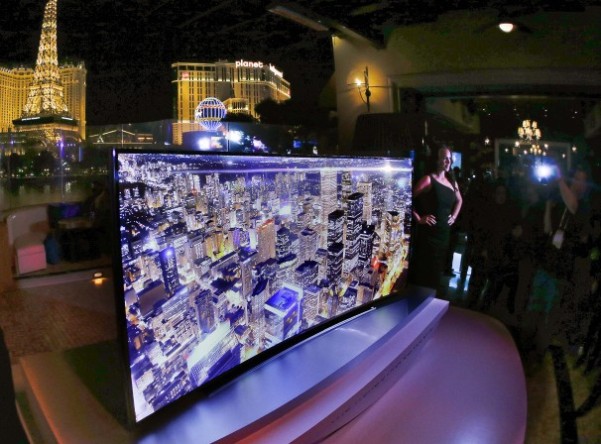 Apart from self-driving cars, new tablets and smartphones, as well as 3D upgrades in computers, the International Consumer Electronics Show (CES) in Las Vegas has yet another surprise for all the high-end tech and entertainment lovers: curved screens on televisions and smartphones.

Different tech giants have placed big bets on curved screen devices during the CES. Samsung launched an enormous curved television last Monday. As expected, its South Korean rival LG also disclosed a curved smartphone, the G Flex, and its own curved TV. Both Asian firms even showed off HDTVs whose screens are able to bend on demand by pressing a button in a remote. For how much these curved screen televisions cost, the bendy displays appear not be very worth it. Nevertheless, it should be acknowledged that the technology behind these curved screen devices is outstanding, since they point to a future where flexible materials have become a common and ordinary fixture everywhere. “It’s a big leap forward,” said John Richard, worldwide business manager of DuPont’s displays division.

Where does the bendy displays’ magic begin? Let’s just start from the basics. There is a distinction between curved screen televisions and flexible ones: Curved displays are more likely to involve a standard flat panel display that has been bent permanently; meanwhile, flexible or bendy displays are capable of bending back and forth more than once, Richard explained. The key to both curved screen devices is the glass used to make them and recent advances have allowed engineers to embed bendy glass into the innards of a device.

Also, it is useful to know that there are two different kinds of display technology: LCD screens and OLED screens. LCD and OLED are the materials that construct the images users see on their smartphone or tablet, or that they watch on their televisions. Generally, it is applied on a layer of glass and then buried behind further layers before being covered up by the last and main piece of glass which the user is able to touch with his or her fingers. It was until 2012 that Corning, the firm behind Gorilla Glass, disclosed a flexible kind of glass known as Willow. This special glass is as thin as a piece of paper, which makes it possible to build rounded surfaces and comes off the production line in enormous 300-meter rolls. Later, Willow is chemically coated to be able to conduct electricity and develop transparency. It is uncertain whether LG and Samsung used a piece of glass as the final layer of their bendy displays or if the inner layers themselves were specifically created using other curved materials; however, the prototypes appear to have some kind of flexible glass in them.