Ford’s roadmap for the future is lined with electric and sustainable plans.

On March 14, Ford announced its plans to expand its lineup of Electric Vehicles (EVs) in Europe by 2024. Seven new vehicles, including three passenger vehicles and four commercial ones, will be part of the new range.

In December 2021, it was speculated that Ford is working towards becoming the second-largest EV maker in the world within the next two years.

The American automaker revealed that it plans to sell over 600,000 vehicles in the region by 2026. Globally, the carmaker intends to sell over 2 million EVs with an EBIT margin of 10%. 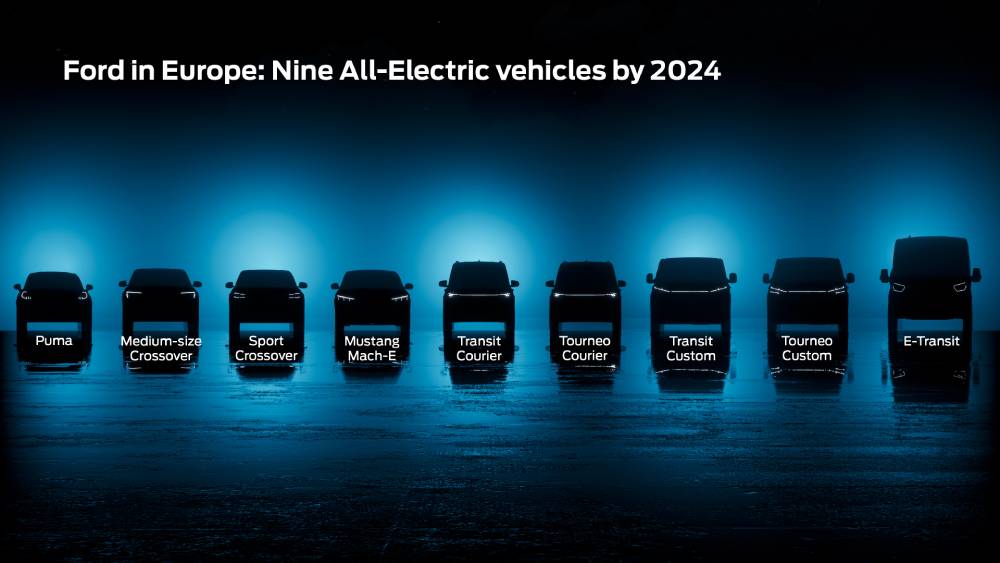 For reiterated its commitment to sustainability by announcing new EVs for Europe.

Last year in June, Ford made a public commitment that 40% of its vehicles will be electrified by 2030. The automaker had previously committed $22 billion to EV development.

Ford’s President and CEO Jim Farley shared his thoughts by saying, “I am delighted to see the . pace of change in Europe ⁠— challenging our entire industry to build better, cleaner and more digital vehicles. Ford is all-in and moving fast to meet the demand in Europe and around the globe.”

The company reaffirmed its commitment to sustainability and expects to deliver a six percent EBIT margin In Europe in 2023.

Ford released the all-electric Mach-E in 2021 and Mach-E GT in Europe this year. It also has plans to unveil the E-Transit in the next quarter.

A medium-sized crossover will begin production in Cologne, Germany, by next year, and another electric vehicle will be added to the plant’s lineup by 2024. Ford plans to invest close to $2 billion to build electric vehicles at the Ford Cologne Electrification Center.

Meanwhile, across Europe, the Ford Puma’s electric version will be made available by 2024.

The Ford Puma was one-of its best-selling vehicles in Europe in 2021. The electric version will be manufactured in Craiova, Romania. The automaker has big plans for its Romanian facility, as the company will roll out commercial and electric vehicles from the plant. Ford Otosan, a joint venture between Ford Motor Company and Koc Holding, will be responsible for maintaining the facility.

To build on their ongoing partnership, Ford, SK On Co., Ltd. and Koç Holding also signed a non-binding MoU to start a new business venture in Turkey. Together, with the support of the Turkish Government, they aim to build one of the largest commercial vehicle battery production sites in Europe.

Acknowledging its success in Europe, as the top-selling commercial brand, Ford’s Transit range will feature four new electric models—the Transit Custom one-tonne van, the Tourneo Custom multi-purpose vehicle, the next-gen Transit Courier van, and the Tourneo Courier multi-purpose vehicle. The first two models will be available by 2023 while the last two will go on road by 2024.

Stuart Rowley, chair, Ford of Europe, summed up the company’s long-term plan, “These new Ford electric vehicles signal what is nothing less than the total transformation of our brand in Europe — a new generation of zero-emission vehicles, optimized for a connected world, offering our customers truly outstanding user experiences.”

According to data compiled by analyst Matthias Schmidt, more than 20 percent of vehicles sold across Britain and Europe in December 2021 were electric. In a heartening turn of events, Europeans seem to prefer electric vehicles (EVs) over diesel-powered ones. Last year, Europe set a new record as sales declined for traditional fossil fuel cars, with battery power dominating the landscape.

Laws supporting electric vehicles coupled with government incentives and benefits have seen Europe take to sustainability in a big way. Tesla was the best-selling EV brand in Europe in 2021.

According to Schmidt Automotive, battery operated vehicle sales will continue to grow and achieve a market share of over 60% in Western Europe by 2030.

As electric vehicles pick up profit and customers, Rowley states, “It’s also about the pressing need for greater care of our planet, making a positive contribution to society and reducing emissions in line with the Paris Climate Agreement.”

Christy Gren
Christy Gren is an Industry Specialist Reporter at Industry Leaders Magazine she enjoys writing about Unicorns, Silicon Valley, Startups, Business Leaders and Innovators. Her articles provide an insight about the Power Players in the field of Technology, Auto, Manufacturing, and F&B.
« Jack Dorsey’s Block to Implement Fingerprint Authentication for Bitcoin
The Awesome Galaxy A Event by Samsung Will Stream Live on March 17 »
Leave a Comment
Close