Ford is set to unveil a family of Bronco vehicles on July 13. A trio of vehicles, in two-door and four-door models along with a downsized baby Bronco sport, will be introduced to Ford fans. The first announcement of an imminent reintroduction of the ruggedly handsome pickup was made at the North American International Auto Show in Detroit back in 2017.

The Broncos were to be unveiled on July 9, but the event was moved to July 13 as it coincided with O J Simpson’s birthday and fans were not happy about it.

Ford also plans to build on a special Bronco experience with off-roading and outdoor adventure playground based in four epic locations. The first of these will be opened in 2021. 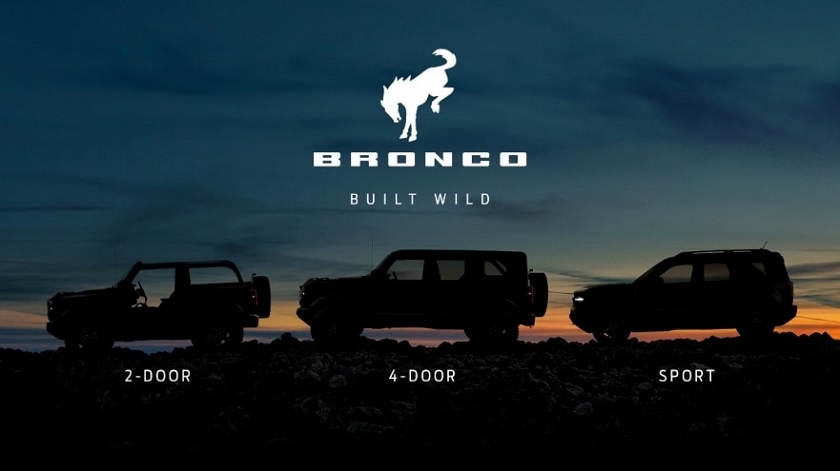 The Bronco was first launched in 1966 and just stampeded onto the scene and into the wild hearts of everyone, setting the mold for the modern SUV. It was discontinued in 1996.

There is also a community of Ford Bronco enthusiasts called the Bronco Nation, and they come together to do all things Bronco including chatting on the net, sharing the vehicle’s wild history, and generally being just sheer fans.

The all-new SUVs have 4X4 driving capabilities and a terrain management system. The vehicle maintains its classy and functional design—signature round headlamps, horizontal cartridge grille, and short overhangs with vertical and clean flat body sides. It comes with removable doors and roofs, which can be stored in the trunk. The mechanism to lift the doors is an easy latch mechanism. Also, the mirrors are mounted to the A-pillars, and not the doors. There will be a Bronco emblem on the front rather than a Blue Oval.The cars come with a manual gearbox with six forward gears, a “C” gear and reverse. The truck will also have electronically locking front and rear differentials.

The automak will come with a long line of performance parts and accessories, which will enable owners to personalize their vehicles fully.

Interested buyers can put down a refundable $100 deposit to secure an early build slot.

The Bronco SUVs will be built at Ford’s Michigan Assembly Plant in Wayne. The plant builds the Ranger pickup and was home to the earlier generation Broncos too.

The Bronco Sport will be built at Ford’s plant in Hermosillo, Mexico. The baby Bronco has been designed around the same car-like unibody platform that underpins the latest Ford Escape.

The Bronco has been put through the most grueling road tests through the Johnson Valley desert and the grueling Baja 1000, one of the world’s toughest off-road endurance races.

The Bronco was first launched in 1966 and just stampeded onto the scene and into the wild hearts of everyone, setting the mold for the modern SUV. It was discontinued in 1996.

The Bronco is set to compete with the Jeep Wrangler, but has a bit of the land Rover and a little from its old avatar too, to create the total new 4×4 version of the present Bronco.

Ford, it seems, wants some of the old glory back with the new Broncos and maybe a big piece of the pie that the Jeep Wrangler has been enjoying for the past so many years.

Anna Domanska
Anna Domanska is an Industry Leaders Magazine author possessing wide-range of knowledge for Business News. She is an avid reader and writer of Business and CEO Magazines and a rigorous follower of Business Leaders.
« Checklist to tick if planning on reopening your business
Audi unveils Q4 E-tron Sportsback, a smaller Coupe version of its SUV »
Leave a Comment
Close