Ford CEO Jim Hackett has said that the company will refresh 75% of its lineups in North America over the next two years, during a closed-door meeting with dealers in Las Vegas on Wednesday. Hackett had through the meeting, sought to restore the confidence among Ford dealers before the company’s third-quarter earnings call, which is expected to record a decline in profits, reports Reuters.

For the past nine years, Ford Motor Company has been struggling to live up to the reputation of its badge, with the automaker’s stock continuously depreciating to worry investors who have severally been promised of better days ahead. Amid the promised fortune, Ford shares sank to a new low last week as it continues to be squeezed by trade tensions and tariffs.

Ford dealer Jim Seavitt, owner of Village Ford in Michigan, who attended the meeting said: “I feel better after seeing the product.”

Ford stock dipped to $8.19 per share – the lowest it has been since November 2009, after investment bank Morgan Stanley lowered price targets for the company and General Motors on Friday following declining industry demand in China. Ford’s third-quarter earnings report is coming up next week Wednesday, October 24. 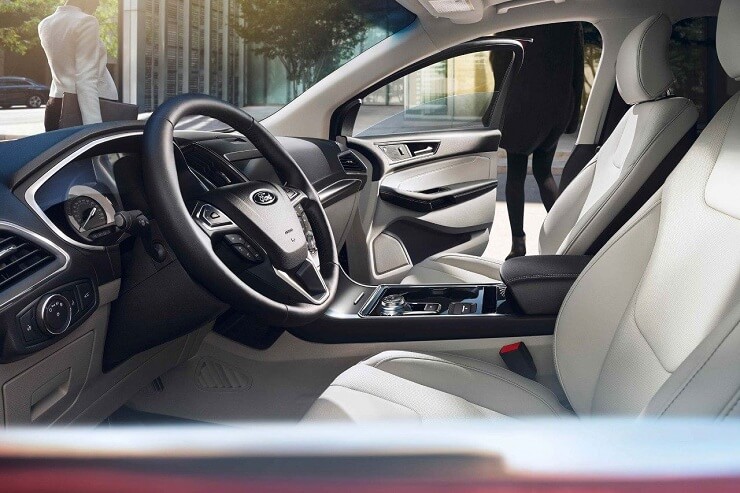 A post-collision braking system which applies automatically to stop the vehicle from rolling after a crash is a new safety features included in the 2019 Edge ST.

Hackett and other Ford executive members promised dealers the company will release new models to replace the aging lineups, and that the future new Ford models would be hybrid or electric and also be produced at a faster pace.

The dealers who have become weary of reassurances were impressed by the outcome of the meeting, saying that the most important aspect was that Hackett gave details of his vision for Ford and explained how they can participate in those plans.

Ford execs also laid out plans to reduce the timeframe for vehicle ordering and delivery by more than half, from 82 days to 38, and also disclosed plans to launch an enhanced customer appreciation program, through which most loyal Ford buyers would be rewarded.

Some of the dealers that previously disputed Ford’s decision to withdraw sedans in the US market due to slumping demand accepted the logic. A major dealer, who doesn’t want to be identified, criticized Ford’s lack of aggression, incentives, and advertising after disclosing that Ford sales at his stores were down by double digits in October.

Ford’s President of global markets Jim Farley told reporters that current CEO Hackett had been the “catalyst” for Ford’s change in plans and direction which dealers have been expecting to see.

The next batch of Ford’s ads launching this weekend was also applauded by the dealers who were in the meeting. The ads – tagged “Built Ford Proud” flaunt the long manufacturing history of Ford and the Ford family’s involvement.

The revamping process of Ford’s entire business may have kicked off, but Ford investors must be patient, mostly with some of the trials. Any success to be achieved will depend on how consumers respond to the new Ford lineups and mode of services. Ford earlier this month announced plans to cut global salaried workforce and to redesign its operations. These are long-term proposals. However, the current change in Ford’s direction will definitely yield some positive results.