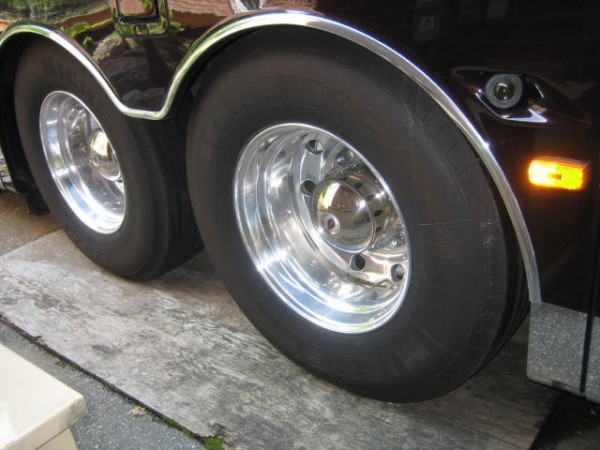 Nitrogen tire inflation may seem like a gimmick, but the practice does have the research to back up its legitimacy. Ford Motor Company conducted a study in 2004 on the effects of nitrogen inflation on tire aging and performance. The study, which took place over a six-month period, found that those tires completely filled with nitrogen had aged slower than those with a 50/50 mixture of nitrogen and compressed air.

“We originally did it to prove a point that tires oxidize from the inside out,” said Dr. John Baldwin, Principal at engineering consulting firm Exponent and one of the authors of the Ford study. “We were trying to develop a tire durability test and the best way to test tires is to use brand new ones.”

The study utilized the Goodyear Wrangler AP LT245/75R16 and tested the tires under three conditions: 99 percent filled with nitrogen, 96 percent filled, and 50 percent filled. The tires were oven aged for intervals of three, six, nine, and 12 weeks. At the end of the aging, the rubber of the tire was tested for its strength and durability. Those tests revealed that the 99 percent and 96 percent tires had little difference between each other, but were both significantly stronger than the 50 percent tires.

“Numerous publications have validated this practice and it is highly recommended for trucking fleets,” Baldwin said. “Truck tires operate at 110 to 120 pounds per square inch. Nitrogen can slow pressure reduction by one to two percent. That’s real pressure for a truck.”

John Daws, Owner of Daws Engineering, agreed that nitrogen tire inflation has its benefits for trucking fleets, but specified that this benefit can only be retained if the trucking fleets owns its own tire casings.

“The benefits accrue over time,” Daws said. “The first year the casing is mounted is when there’s the biggest oxygen intrusion. If the fleet doesn’t own the casing, then the benefits will go to someone else when tires are sent in for a retread.”

Daws Engineering is a consulting firm that specializes in tire forensics. Daws has conducted previous studies on nitrogen tire inflation, most recently on passenger cars and light truck tires. For larger trucks, Daws said that nitrogen tire inflation has the potential to add one additional retread to each tire.

“It does eliminate, or greatly reduce, oxygen permeation,” Daws said. “But, I can’t say it’s uniformly good for everyone. The economics of it are tough.”

Baldwin, however, says that nitrogen tire inflation is great for fleet owners, since the trucks are almost always in service. Even saving just one retread can do a lot for a fleet that may have hundreds or thousands of vehicles.

“The practice is oversold to certain markets, but the benefits for fleets are more tangible,” he said. “This is legitimate stuff.”

Almost half of the marriages end in divorce is an oft-quoted adage, but surprisingly, this is not true in today’s world. The reasons are varied, gender equality, the higher p
16 hours ago

JPMorgan Chase, the largest U.S. bank by assets, has appointed two new executives to head its information units in a bid to make its workforce more inclusive and increase racial an
17 hours ago

The U.S. solar industry witnessed a 7% cut in jobs due to the coronavirus and increasing use of labor-saving tech in the industry, according to an industry report. Job decline is n
17 hours ago