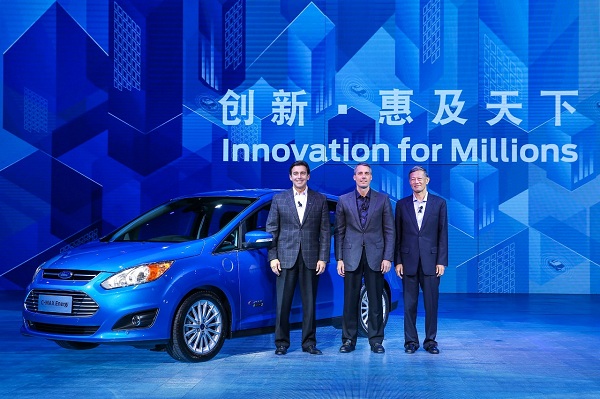 Ford Motor Co. announced on Monday it will invest 11.4 billion Yuan ($1.8 billion) over the coming five years in China, where its sales have been plummeting amid a brutal industrywide shakeout and sky-high competition.

The Dearborn, Michigan-based automaker has rapidly secured a better slice of market share over last few years at the expense of Japanese auto industry leaders, helped by its efforts to design cars around Chinese consumers’ tastes.

“It’s a great opportunity to grow not only our core business of selling cars and trucks but also provide services to people that may not want a car but still want to be mobile.”

Potential features in Chinese products include allowing drivers to use their mobile chat functions, more car systems through their smartphones, particularly during gridlock traffic jams. The recent, G4 Beijing-Hong Kong –Macau expressway hair-pulling traffic jam where thousands of commuters were trapped for hours illustrates the depth of the problem.

The announcement comes amid a time when China’s Association of Automobile Manufacturers said that industry sales have been facing headwinds, with gross sales at the slowest pace in more than six years. Car sales are dented by several reasons including the drop in China’s stock markets and falling consumer confidence. Moreover, laws in cities like Beijing and Shanghai are restricting vehicle registrations in an effort to ease congestion, and encouraging consumers the use of electric vehicles to reduce emissions. China’s new-car sales dropped 3.4% to 1.42 million vehicles in August from a year earlier.

Speaking at a corporate event in Shanghai, Ford CEO Mark Fields also said the company will introduce a fuel-efficient plug-in hybrid, the Ford C-MAX Energi, and the Mondeo conventional hybrid in 2016 to respond to Chinese government’s call to curb pollution. The space-efficient Ford C-Max Energi features lithium-ion battery and an electric motor with a gasoline engine. Ford C-Max Energi is a plug-in hybrid with a four-cylinder engine and an electric motor that can produce ample power for highway passing. When running on electric power alone, it gets 88mpg, which is comparatively less than most plug-in rivals. Its standard features include heated front seats, dual-zone automatic climate control, power-adjustable driver seat, push-button start, USB port, satellite radio, Bluetooth, rear parking sensors and the Ford voice-activated SYNC system along with MyFord Touch infotainment system.