Ford Motors Co. used the CES 2017 stage to announce an industry-first collaboration. The Detroit, Michigan-headquartered automobile manufacturer is going to put Amazon’s Alexa in vehicles starting this year, expanding Ford’s Sync 3 Applink features considerably. According to Ford’s press release announcing the news, the Alexa integration is the ‘most comprehensive ever in a vehicle’. 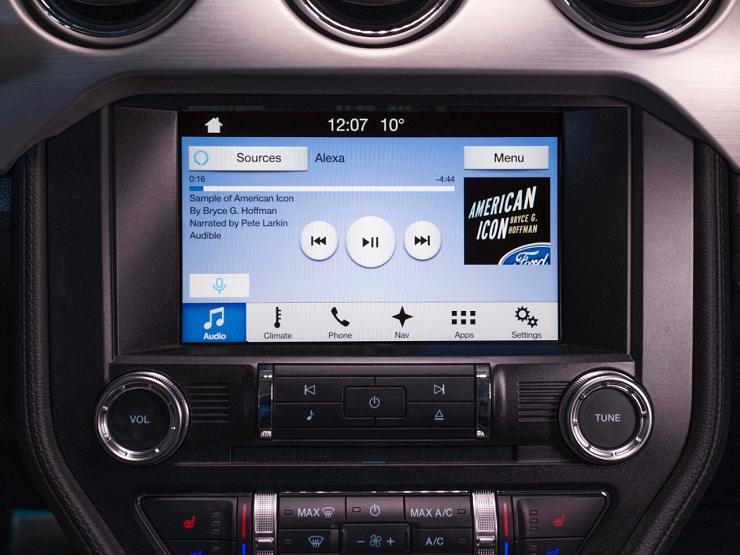 AMAZON ALEXA
Ford and Amazon team up to offer consumers the ability to access their car from home, and call up other features from their vehicle via Alexa – Amazon’s cloud-based voice service.

Alexa is Amazon’s cloud-based voice service. Using Ford’s SYNC 3 infotainment system loaded with Amazon Alexa integration, occupants can do things like play and push playback of music and audiobooks. The integration supports a host of other services, including the ability to control smart home devices and order items through Amazon.com.

The Ford – Alexa connection will rely on the driver’s smartphone and additional Alexa equipment – an Amazon Echo, Echo Dot or Tap in the home. Unlike using Amazon Echo in the home, drivers will need to push a voice command button in the car.

“Ford and Amazon are aligned around a vision that your voice should be the primary way to interface with your favorite devices and services,” said Don Butler, executive director, Ford Connected Vehicle and Services.

With Amazon’s Alexa integration in Ford vehicles, occupants can find destinations from their cars and have the waypoints transferred to their in-car navigation system. The integration will eventually include home-to-vehicle functions, such as asking Alexa in the home for the vehicle’s current fuel level, adding items to their grocery lists, check news, etc. Occupants will also be able to adjust their house’s thermostat, control its lights, as well as the security system right inside their cars. Although, they’ll have to wait for the second phase of the rollout to access all those features.

Ford Alexa integration will arrive in two phases. Later this month, Amazon devices will be connected to your car from within your home, starting with Ford Focus, Fusion Energy and C-MAX Energy. This summer, Ford will add Alexa’s in-car voice activation features in vehicles, letting you control features from the comfort of your home via voice commands.

In addition, select 2018 Ford models will offer Wi-Fi hotspot capability to Sync connect, for up to 10 devices. The LTE hotspot will be powered by AT&T’s 4G and will be able to power devices up to 50 devices away.

And finally, Samsung Gear S2 and S3 owners will be able to connect their device to Ford’s Sync 3 infotainment system. The feature will allow an unobtrusive way to log parking spots and set audio alerts.

Anna Domanska
Anna Domanska is an Industry Leaders Magazine author possessing wide-range of knowledge for Business News. She is an avid reader and writer of Business and CEO Magazines and a rigorous follower of Business Leaders.
« Fiat Chrysler Unveils its All-Electric Semi-Autonomous Minivan at CES 2017
China’s Renewable Energy to Get a Boost with $361 Billion Fund by 2020 »
Leave a Comment
Close