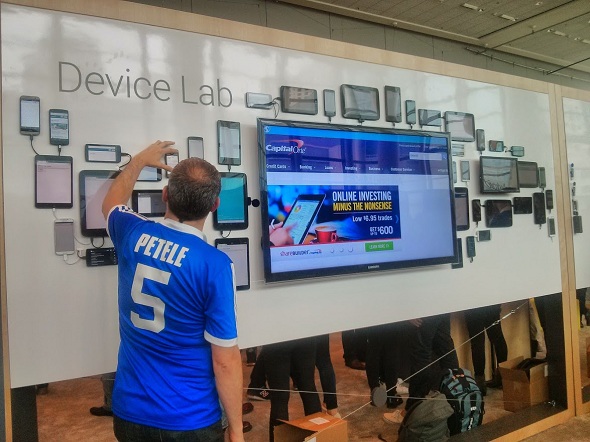 The next version of its Android operating system will encrypt user data by default, which means data will be inaccessible unless the person has the decryption key. (Google I/O Device Lab)

A day after Apple detailed its new privacy measures; Google also announced that they will be boosting up the encryption tactics on devices powered by their Android operating systems. The next version of its Android operating system will encrypt user data by default, which means data will be inaccessible unless the person has the decryption key.

A Google spokesman said that smartphones and tablets running Android system long offered encryption, but only as an option. But for devices with Android “L” installed, it will now be turned on automatically. It is expected to be released to the public in October.

“For over three years Android has offered encryption, and keys are not stored off of the device, so they cannot be shared with law enforcement,” the spokesman said in a statement. “As part of our next Android release, encryption will be enabled by default out of the box, so you won’t even have to think about turning it on.”

Encrypting data on a password-protected phone means law enforcement won’t be able to access data on the device even with its court-issued warrants. They will be blocked from getting hold of messages, pictures, emails, contacts and other personal information stored on the upcoming Android or Apple smartphones and tablets. The only way to get hold of the data would be to compel a user to give up his password.

Apple revealed that its new encryption, built into the iOS 8 operating system which is available on the iPhone 6 are protected by users’ personal passcodes that even Apple can’t bypass to access data. It also can be installed on many existing iPods, iPhones and iPads.

“Apple cannot bypass your passcode and therefore cannot access this data. So it’s not technically feasible for us to respond to government warrants for the extraction of this data from devices in their possession running iOS 8”, says the new policy on Apple’s website.

Google’s encryption methods are slightly different from Apple’s. Apple’s new operating system, iOS 8, can be downloaded by consumers with even an iPhone 4S. Android updates are released much later by carriers.

Besides that, Google’s encryption applies only to data on the phone itself. It does not apply Google Hangouts messages, which are encrypted as they ramble to and from Google but not while inside Google’s servers.

Christy Gren
Christy Gren is an Industry Specialist Reporter at Industry Leaders Magazine she enjoys writing about Unicorns, Silicon Valley, Startups, Business Leaders and Innovators. Her articles provide an insight about the Power Players in the field of Technology, Auto, Manufacturing, and F&B.
« Logitech Enters The Home Automation Arena with Harmony Remote and Hub
A Business of Security: Google, Dropbox Partner to Build Ease of Use Internet Security »
Leave a Comment
Close