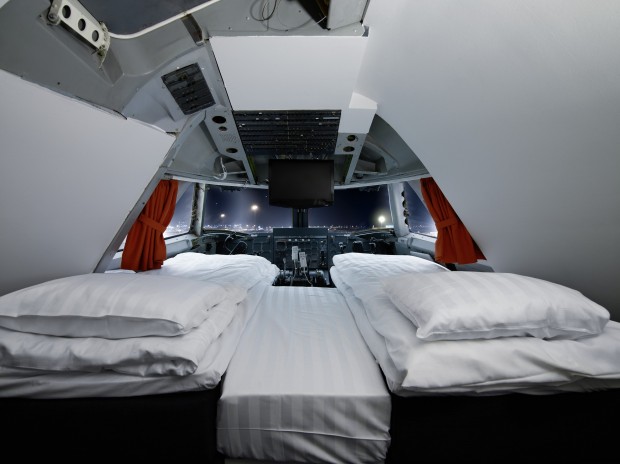 Jumbo Stay, the Plane Recycled into a Hotel

All those of you who believe in the beauty of recycling, you’re going to love this one, especially so if you’re fascinated by creative spatial transformations.

Presenting one of the world’s coolest stays, Jumbo Stay, in Stockholm, offers guests the opportunity to spend the night aboard a retired plane that has been refurbished into a fully-furnished hostel, equipped with a café, a souvenior shop and the works!

In the process of expanding to other airports, Jumbo Stay plans to grow bigger and better very fast. That’s what we call enterprising. 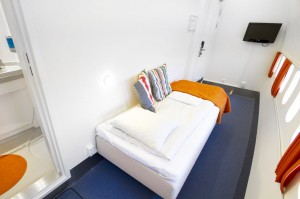 Having been in use since mid-January 2009, Jumbo Stay is a worn out 1976 Boeing 747-212B that has been fully refurnished and converted into a hostel.

Prior to 2002, which is when this jumbo jet (called Liv) was retired from flying, the plane used to operate Charter and Pilgrim flights. Grounded at Stockholm Arlanda Airport since November 2002, Liv went through a total makeover before opening up in 2009 as a hostel offering an entire range of accommodation options.

From a basic dorm beds-type of set up, to an exclusive cockpit suite with a panoramic view, Jumbo Stay offers rates ranging from 400 SEK (about $64 USD) per night for a dorm bed in a 4-person room, to 3300 SEK (approx. $523 USD) for the cockpit suite. Mid-way options include single rooms, double rooms and family rooms.

“Arlanda will have a new attraction and a quite different alternative for spending the night. This will suit many categories of guests, such as families with children, young people and “experience seekers” growing tired with the usual hotels,” Mr. Dios said in a press release.

Jumbo Stay is part of the sudden surge of innovative eco-hotels and hostels that have come up in different parts of the world.

Like the Cozy De Vrouwe van Stavoren Hotel in the Netherlands, made from four giant 14,500 liter casks of wine which were once used to flavor thousands of bottles of Beaujolais from the French winery. Instead of being destroyed, these casks were transported from France to quaint northern port town of Stavoren in the Netherlands, and repaired and furnished to offer modest two-person rooms with standard amenities and even an attached bathroom and sitting room.

Or the hotel made from shipping containers in Uxbridge, UK, by the budget hotel company Travelodge in 2008. The Uxbridge hotel has been built using 86 shipping containers which were refurbished with plasterboard walls, electrics and bathrooms in China before being shipped to the UK. Once on site, these ready modular container-turned-into-rooms were stacked and assembled like lego pieces by bolting them together.

Given the savings in time and construction costs that are achieved by using refurbished, pre-assembled shipping containers, Travelodge, after building the Uxbridge hotel, announced that they would build half their future hotels in this manner.

It IS the age of smart, creative, green business ideas, isn’t it?