Fluorescent Protein to Revolutionize the Process of In Vivo Imaging 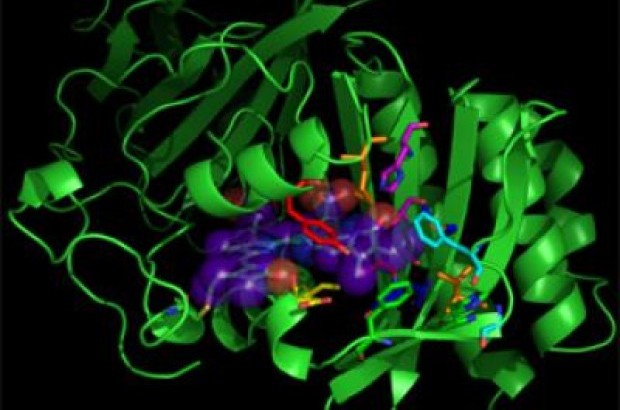 Fluorescent Protein for in vivo imaging

In what could possibly be a breakthrough in the process of whole-body imaging, researchers at the Albert Einstein College of Medicine of Yeshiva University have developed the first fluorescent protein, which has been dubbed iRFP, that enables scientists to clearly “see” the internal organs of living animals without the need for a scalpel or imaging techniques that can have side effects or increase radiation exposure.

Fluorescent-protein imaging, as opposed to other body-scanning techniques, involves neither radiation exposure nor does it require the use of contrast agents, and offers the promise of revolutionizing some very critical medical procedures, such as noninvasively monitoring the growth of tumors in order to assess the effectiveness of anti-cancer therapies.

The protein has been developed in the laboratory of Vladislav Verkhusha, Ph.D., associate professor of anatomy and structural biology at Einstein and the study’s senior author. 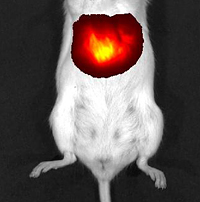 According to Dr. Grigory Filonov, a postdoctoral fellow in Dr. Verkhusha’s laboratory at Einstein, and who first wrote about this new finding in the Nature Biotechnology publication, fluorescent-protein imaging helps avoid the radiation risk that often accompanies standard x-rays and computed tomography (CT) scanning.

iRFP scores a big one-up over both these techniques, while not involving the use of radiation, the contrast provided by the protein itself is so vibrant that contrasting agents are also not required.

Colored fluorescent proteins, derived from jellyfish and corals, that aid the external visualization of cells and their organelles and molecules, have been used by scientists for almost two decades now.

However, the process of using these proteins to scan the bodies of mammals has been a massive challenge until now since hemoglobin present in a mammal’s blood effectively absorbs blue, green, red and other wavelengths used to stimulate standard fluorescent proteins along with any wavelengths emitted by the proteins when they do light up.

The iRFP fluorescent protein, developed from a bacterial phytochrome (the pigment that a species of bacteria uses to detect light), both absorbs and emits light in the near-infrared portion of the electromagnetic spectrum.

This is the spectral region in which mammalian tissues are nearly transparent.

Researchers from the University of California, San Diego, led by 2008 Nobel-Prize winner Dr. Roger Tsien, first showed that bacterial proteins called phytochromes can be engineered into infrared-fluorescent proteins (IFPs) in 2009. According to this earlier research, because the wavelength of IFPs is able to penetrate tissue, these proteins are suitable for whole-body imaging in small animals.

To judge the efficacy of the protein, researchers targeted their fluorescent protein to the liver, which is a particularly difficult organ to visualize because of its high blood content.

The study involved adenovirus particles containing the gene for iRFP being injected into mice. Once the viruses and their gene cargoes infected liver cells, the infected cells expressed the gene and produced iRFP protein. The mice were then exposed to near-infrared light and it was possible to visualize the resulting emitted fluorescent light using a whole-body imaging device. Fluorescence of the liver in the infected mice was first detected the second day after infection and reached a peak at day five. Additional experiments showed that the iRFP fluorescent protein was nontoxic.

“Our study found that iRFP was far superior to the other fluorescent proteins that reportedly help in visualizing the livers of live animals,” said Dr. Filonov.

“iRFP not only produced a far brighter image, with higher contrast than the other fluorescent proteins, but was also very stable over time. We believe it will significantly broaden the potential uses for noninvasive whole-body imaging,” he added,