Mercedes Vivint Partnership to Shake up Tesla’s Market Share in the U.S. 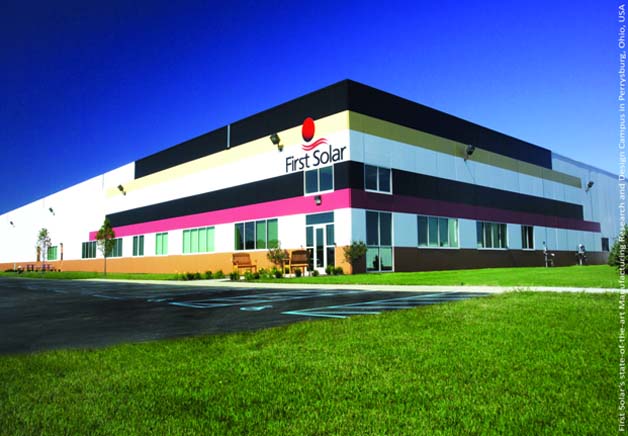 First Solar Inc was formed in 1999 and launched production of commercial products in 2002. It achieved the lowest manufacturing cost per watt in the industry, breaking $1 per watt in 2008. They developed the first comprehensive, prefunded module collection and recycling program in the PV industry. First Solar is the largest manufacturer of thin film solar modules, having expanded manufacturing capacity to an annualized run rate of 59.6MW per line in the 3rd quarter of 2010. By enabling clean, renewable electricity at lower costs, First Solar is providing a sustainable alternative to conventional energy sources.

This goal has driven First Solar to become one of the fastest growing manufacturers of solar modules in the world. FS Series 3 PV Modules represent the latest advancements in solar module technology, and are rapidly driving down the cost of solar electricity to rates comparable with traditional fossil fuel-based energy sources.

Worldwide demand for energy increases each day. By the year 2025, demand is projected to double from existing levels. Satisfying this global need for energy through traditional fossil fuel methods is predicted to produce irreversible environmental damage.

No natural resource is as abundant as the sun. By harnessing this resource, solar energy provides a sustainable, renewable, and clean source of energy. It conserves natural resources by considerably reducing fossil fuel dependence and greenhouse gas emissions. Using solar energy, along with other renewable sources, is a sustainable solution to meeting the long-term energy requirements of a global society.

First Solar is committed to providing superior environmental benefits while ensuring the health and safety of their associates, customers and the communities in which they operate. They are accomplishing this by providing a cost effective solar energy solution that displaces conventional fossil fuel technologies and practicing the environmental philosophies of extended producer responsibility and product life cycle management, where they take into account the environmental impact of their products from raw material sourcing through collection and recycling.

As the result of global industrialization and economic growth, the issue of what happens to products at the end of their useful life needs to be addressed. First Solar is embracing its responsibility by implementing solutions today to reduce the number of solar modules that end up as waste in the future. Practicing a concept called extended producer responsibility, First Solar has voluntarily established the photovoltaic industry’s first comprehensive, prefunded solar module collection and recycling program. The program, an integral part of First Solar’s product offering, is designed to be unconditional, convenient, and free. Anyone wishing to dispose of First Solar modules can request collection at any time, at no additional cost. The main goals of the program are to maximize the recovery of valuable materials for use in new modules or other new products and minimize the environmental impacts associated with PV system production.

First Solar PV modules are the first thin film PV modules to reach 2GW of modules in installations. To support the growing demand, First Solar continues to push the limits on volume manufacturing. Integrating each production step, First Solar manufactures the modules on high throughput, automated lines from semiconductor deposition to final assembly and test – all in one continuous process. The whole flow, from a piece of glass to a completed solar module, takes less than 2.5 hours.

With less than 2% of the equivalent semiconductor content found in crystalline silicon PV modules, First Solar modules are engineered to deliver high energy yields. Using cadmium telluride (CdTe) as the semiconductor material, First Solar makes it affordable to convert solar energy into the type of electricity we use every day. 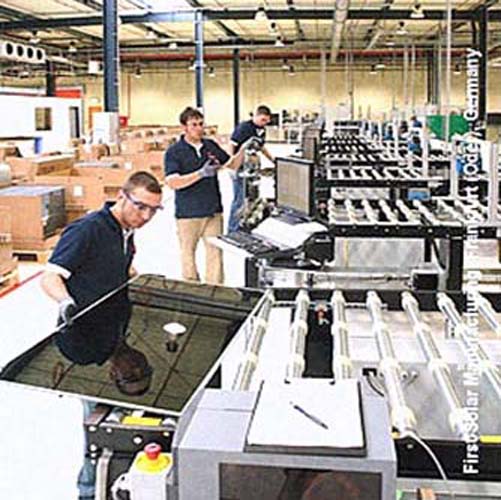 In general, solar cells become less efficient at converting solar energy into electricity as their cell temperatures increase. At First Solar, however, the efficiency of CdTe, the semiconductor used, is less susceptible to cell temperature variations than traditional semiconductors. — CdTe also converts low and diffuse light to electricity more efficiently than conventional cells. Together, this means First Solar modules produce more electricity on hot days, under cloudy weather and across a larger percent of normal daylight.

These attributes have led the National Renewable Energy Laboratory in Golden, Colorado to recognize CdTe’s potential for achieving the lowest production costs among current thin film technologies. As a result, future module costs well below $1.00/Wp have been predicted by NREL and others. 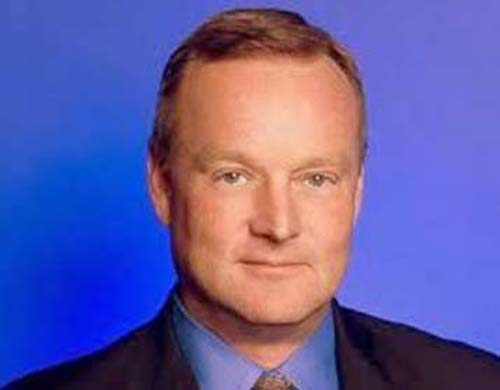 “It is no surprise that America’s largest thin film solar project was built right here in California, where my Administration has successfully created a climate where green businesses can thrive,” said California Governor Arnold Schwarzenegger. “It is forward-thinking businesses such as First Solar that will help California reach its nation-leading greenhouse gas reduction and Renewable Portfolio Standard goals, as well as create the new green jobs that will help spur our economic recovery.”

“Solar is the great untapped resource in California, and we are pleased to be part of this significant milestone for solar development in our state,” said Marc Ulrich, SCE vice president, Renewables and Alternative Power. “Bringing this power to the grid helps SCE maintain its position as the nation’s leading utility for renewable energy.”

“California, as it has in many arenas, is leading the way in encouraging large-scale clean energy sources,” said David Crane, NRG Energy President and CEO. “NRG, through our association with pioneers like First Solar and forward-thinking companies like SCE, seeks to help clean our air while stocking our country’s clean energy economic growth through commercial implementation of solar technology.”

First Solar expanded its offerings in California in 2008. The Blythe plant is a model for First Solar’s future large-scale solar developments. “The development, project finance and construction of this solar plant demonstrate First Solar’s capabilities in utility scale projects,” said Bruce Sohn, president of First Solar. “With a three-month build-out, we are pleased to be bringing it online ahead of schedule.”

Using First Solar’s industry-leading thin film PV panels that convert sunlight directly into electricity with no water consumption during operation, the Blythe plant will generate over 45,000 megawatt-hours of clean, affordable, sustainable electricity per year. This solar generation will avoid approximately 12,000 metric tons of carbon dioxide emissions annually – the equivalent of taking over 2,200 cars off the road. First Solar will provide operations and maintenance services at Blythe under a long-term contract with NRG.