Fiat recently announced the arrival of the new 500, the 100% electric car for the market. The city car will reach dealers in early 2021.

The new car takes off on its heritage of 63 years. It is still a city car that is affordable and provides a variety of best-in-class features such as its range, autonomous driving, and battery options.

The New 500 is made up of three trim levels – Action, Passion, and Icon, and two battery options. Each provides a high level of standard specification to suit different lifestyles.

The entry-level New 500 ACTION is fitted with a 70kW motor, accelerating from zero to 62mph in 9.5 seconds and with a limited top speed of 84mph.

It includes a lithium-ion battery with a 23.8kWh capacity, it gives over 150 miles in the city. It comes with a 50kW fast charging system and a 3kW cable for charging at home or at work.

It has ADAS (advanced driver assistance system) features, including Drowsy Driver Detection, to monitor driver concentration levels; Autonomous Emergency Braking, which, along with other vehicles can also recognize cyclists and pedestrians; Lane Keep Assist, a system that alerts the driver to get back in lane when it detects any drifting; and Traffic Sign Recognition, which reads road signs and recommends the correct speed to drive at.

It has three driving modes – Normal, Range, and Sherpa, to select according to preferred driving style and requirements. Range mode allows one to accelerate and decelerate with one pedal and the Sherpa mode is for when charge is less and it uses various in-built systems at optimal levels to take you to the nearest charging station.

The New 500 ACTION has a ‘smart audio’, turning any smartphone into its infotainment system. It consists of a smartphone cradle, a Bluetooth connection to link a smartphone to the speakers, and a specific app to use inside and out of the car.

500 ACTION is available as hatchback only.

The mid-range version of the New 500 is available with a 42kWh battery, providing up to 199 miles, which can increase to 285 miles when only driven in the city. It has a fast charge, giving 80% ranged in 35 minutes.

The interiors come equipped with FCA’s new infotainment system with a 7-inch touchscreen, wireless Apple CarPlay and Android Auto for connected services and a DAB radio. The new system also boasts the Natural Language interface system with advanced voice recognition. The wake phrase is “Hey Fiat” and then ask it to control range and charging settings, program the air conditioning and choose favorite music. 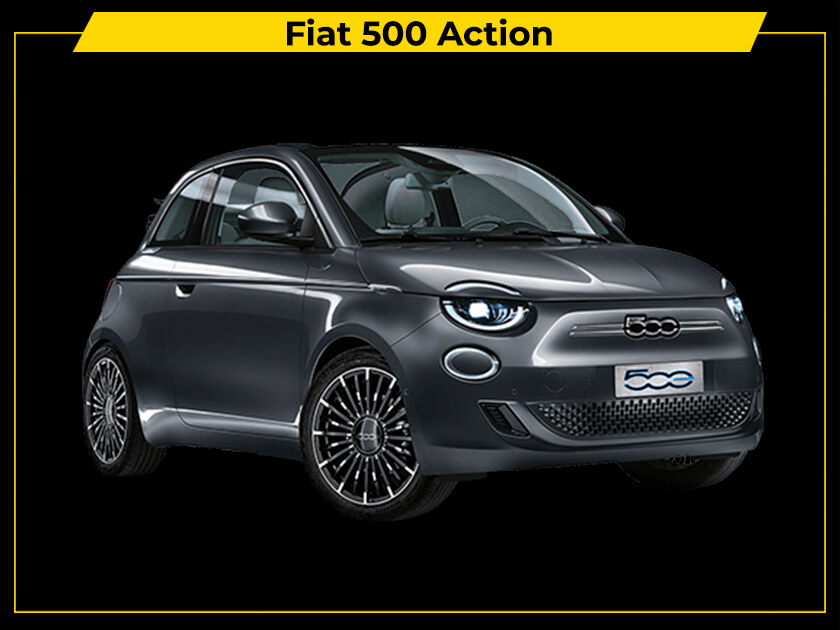 The 118hp motor has an output of 87kW, providing a maximum speed limit of 93mph and acceleration from zero to 62mph in 9.0 seconds and zero to 31mph in 3.1 seconds.

The New 500 ICON has the same battery as the Passion—42kWh with a best-in-class range of 199 miles in the WLTP cycle and rapid recharging.

It has hands free access and a black button-free ‘pebble’ – a smart wearable key.

The FCA engineers have created a new electric motor, integrating new control, safety and entertainment technologies for the New 500 cars.

The concept behind the car was the same as in a smartphone—ease of use.

That was the starting point for the New 500’s technology ‘ecosystem’, making it easy-to-use and intuitive.

The latest infotainment system, a connected platform, new advanced voice recognition system, activated hands-free with the phrase ‘Hey Fiat’, all these connectivity features are enabled by the new UConnect Box, offering access to the New 500’s UConnect Services, which can transform the car into a Wi-Fi hotspot to connect up to eight devices at the same time.

Another important feature of the New 500 is the new vehicle-to-grid project at the Mirafiore factory in Turin, which will charge the cars using solar panels mounted on the roof of the factory and use the cars’ batteries to provide grid stabilization services. The V2G system was created in cooperation with ENGIE Eps and Terna. Once fully operational, it will be possible to connect 700 New 500 to the system.

Sky Drive, a new park will be opened in the City of Turin on 4th July 2021 at the factory premises. Developed by a team of specialists led by the architect Benedetto Camerana, the project covers 27,000m2 of pedestrian walkways, driveways and gardens. It will showcase the green ecosystem adopted by the carmaker.

Overall, the appearance of the New 500 conveys a powerful and robust character, more compact and elegant, with clean and simple lines. In addition, the interior space available has been organized using various modular storage compartments to meet passengers’ every need.