Federal Reserve Chairman Jerome Powell said that the center is considering tapering off its bond-buying program and stimulus packages on the back of clear signs of recovery in the US labor market.

In his address at a symposium for global central bank chiefs in Jackson Hole, Wyoming, Powell said that the total stoppage of aid was not on the cards, but he signaled that the bank’s $120 billion monthly bond purchases could soon be tapered. Other regional Fed chiefs are of the opinion that the time is right to cut asset purchases before it begins doing more harm than good.

Powell made it a point to clear that this would not signal any changes to near-zero long-term interest rates. He cautioned that the labor shortages, as well as the “near-term risk” of the Covid-19 Delta variant, still required caution, and he was against taking any hasty policy decision. 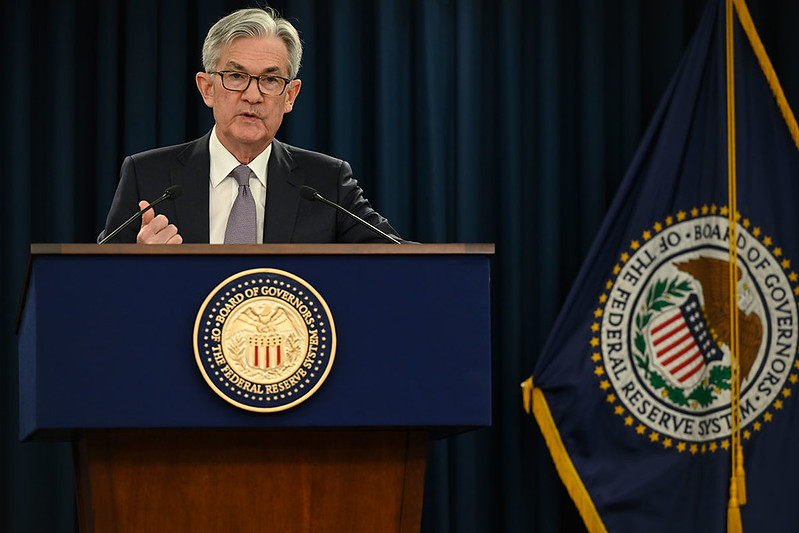 “Today, with substantial slack remaining in the labor market and the pandemic continuing, such a mistake could be particularly harmful,” Powell said. “We know that extended periods of unemployment can mean lasting harm to workers and to the productive capacity of the economy.”

“The timing and pace of the coming reduction in asset purchases will not be intended to carry a direct signal regarding the timing of interest rate liftoff, for which we have articulated a different and substantially more stringent test,” Powell explained.

Powell highlighted that unemployment dropped sharply from its peak of 14% when Covid-19 shutdown large portions of the country to a more manageable 5.4%. The Fed chief, while acknowledging that Delta variants could derail and progress gained, said, that “the prospects are good for continued progress toward maximum employment.”

The latest data from the US Commerce Department shows that the Personal Consumption Expenditures price index, the Fed’s inflation measure of choice, jumped 0.4%. However, last month’s Consumer Price Index (CPI) data also showed a drop from 0.9% in June to 0.5% in July, suggesting that the consumer demand may be slowing down.

The S&P 500 went up 0.7 per cent following his speech. Benchmark 10-year Treasury yields, which underpin borrowing rates across the globe, fell 0.04 percentage points to 1.31 per cent.

Conflicting economic signals along with the threat of the resurgence of Delta variants have made it difficult for central bankers to reach a consensus on when exactly the “tapering” process should begin.

Looking at the surging US consumer prices, economists and analysts feel that the Fed should end these bond purchases soon if it wants to avoid even higher inflation and financial instability.

“If sustained higher inflation were to become a serious concern, the Federal Open Market Committee would certainly respond and use our tools to assure that inflation runs at levels that are consistent with our goal,” Powell remarked, reflecting these concerns.

But he was also cautionary, saying policy changes based on temporary waves in the economy should not be implemented. “If a central bank tightens policy in response to factors that turn out to be temporary, the main policy effects are likely to arrive after the need has passed,” he said. “The ill-timed policy move unnecessarily slows hiring and other economic activity and pushes inflation lower than desired.”

More “hawkish” members of the policymaking FOMC want an end to the program by the second half of next year at the latest. That would give the Fed the flexibility it needs to raise US interest rates in 2022 if inflation proves more persistent than initially anticipated.

But with almost 6 million more Americans out of work than before, another faction of officials want a more patient approach. Tom Graff, head of fixed income at Brown Advisory, said: “I think he has crafted this speech to detach tapering from any other policy move.” “He has to walk this fine line between acknowledging that inflation is there, but also explain why this is actually more of a micro step not implying any steps beyond that”.