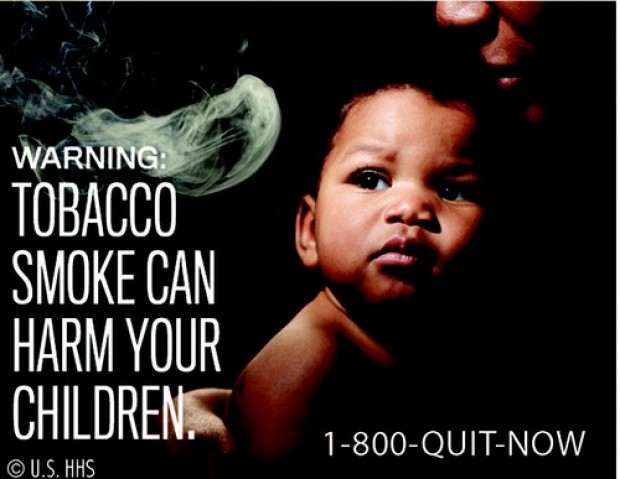 The gruesome, disturbing graphics, such as that of a man blowing cigarette smoke out of a tracheotomy hole in his neck, are, according to Margaret Hamburg, Commissioner of the FDA, “an important and powerful tool” in the fight to reduce tobacco-related disease and death.

According to Hamburg’s estimate, the new graphic warnings campaign is likely to make as many as 213,000 of the nation’s cigarette smokers to quit by 2013, with smaller numbers of quitters through to 2031.

The stark, gory graphics – the back-bone of this campaign – will be accompanied by simple, equally stark text, such as “Cigarettes are addictive”, “Tobacco smoke can harm your children”, and “Cigarettes cause cancer.”

Promising to become “new mini-billboards for prevention,” in the words of assistant secretary for health at the Department of Health and Human Services, Dr. Howard Koh, the images and related text will cover the top half of all cigarette packs sold in the U.S. starting Sept. 22, 2012.

The number of American smokers fell significantly between 1970 and 2004, from nearly 40% of the total population to about 20%. Since 2004, however, the rate has more or less stalled.

Current estimates say that about 46 million adults in the U.S. smoke cigarettes.

According to FDA estimates, medical expenses and lost productivity resulting from tobacco use cost the U.S. economy roughly $200 billion very year. In contrast, according to the latest data from the Federal Trade Commission, about $12.5 billion are spent by tobacco companies annually on cigarette advertising and promotion.

With 15 billion packs of cigarettes being purchased by Americans annually, by introducing the compulsory health warnings, the U.S. is the latest of about 40 other countries – including Canada, a number of European countries, Mauritius, Uruguay, Thailand, Malaysia, India and others – that have enforced the printing of grim graphic labels on cigarette packs to make stark statements about the dangers of smoking.

According to a survey carried out by the World Health Organization (WHO), grim graphic warning labels on cigarette and tobacco packs made an impact on a majority of smokers, with over 25% of them saying that they seriously considered kicking the habit because of these warnings.

Too Hardcore for the US ?

While most health experts in the U.S have voiced their support for this new campaign by the FDA, some have also voiced concerns about the images being too graphic for the U.S, which has not been exposed to these kinds of images at all.

This also carries a risk that the younger generation might soon become immune to the grim nature of these warnings, requiring a regular increase in goriness of the campaign.

How is the tobacco industry likely to react to these images released by the FDA yesterday ?

It’s too early to tell yet with regards to these specific images, but if one is to look at precedents, in September 2009, Reynolds-American Inc., one of the two largest American cigarette companies, alongwith several smaller companies, filed a federal lawsuit against the “unconstitutional” nature of the mandatory use of larger warning labels, because of which, according to the companies, their own products were “stigmatized”.

In another instance, while Altria Group, the parent company of cigarette maker Philip Morris USA supports FDA regulation of tobacco products, in comments submitted to the FDA in January, Altria said that “any government requirement that compels a private entity to carry a message not of its own choosing raises constitutional concerns,” implying that it believes that the warning label mandate violates its First Amendment rights.