Can you handle it?

It’s designed to reach a record-breaking 1,000mph – making it faster than a speeding bullet! British engineers finally begin construction this week on what they hope will be the world’s fastest car.

It is hoped that the Bloodhound, which has been in design for three years, will break the land speed record on a dried out lake bed in South Africa’s Northern Cape in late 2012.

What does it take to construct the Bloodhound? 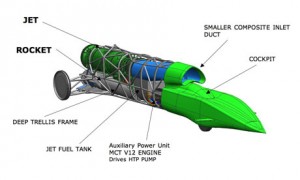 Being designed by Richard Noble, the Bloodhound will be 42 ft long, 9 ft high and will weigh 6.4 tonnes and will boast a top speed of 1,050 mph. Powered by the same engine used by the Eurofighter, this supercar will deliver 47,000 pounds of thrust to a car weighing just over 6000 kilograms.

The engine (effectively a rocket!) will be the largest engine booster of its type built in the UK, while the vehicle will have nearly one metre diameter aluminium alloy wheels that will need to withstand rotations of 10,000 rpm and being blasted by salt lake bed grit as the car accelerates to full speed.

The Fast and The Furious… 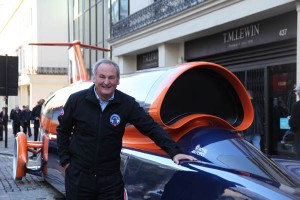 Driven by Andy Green, a Royal Air Force pilot, the Bloodhound is set to make its debut by breaking the Thrust SSC’s existing land speed record in South Africa’s Northern Cape in late 2012.

It has been 13 years since the current record was set, also by a British designed car the Thrust SSC and three of the original team members are working with the Bloodhound team – project director Richard Noble, chief aerodynamicist Ron Ayres, and of course, Andy Green.

The current world land speed title for their record-breaking car Thrust also lies with Richard Noble and Andy Green at 766 mph. During its record-breaking run, Thrust SSC accelerated to 600 mph (970 km/h) in just 16 seconds and became the first car to break the sound barrier.

Now Mr Green hopes to break the current land speed record in it – by more than 200 mph – becoming the first man to drive through the 1000 mph barrier and become another record-breaking British success in a history of land speed records.

The project is also being followed closely in British schools with activities designed to promote innovation in science and technology.

The record attempt won’t be for another 2 years although test runs will take place in the meantime allowing the media to gain a glimpse of this supercar.