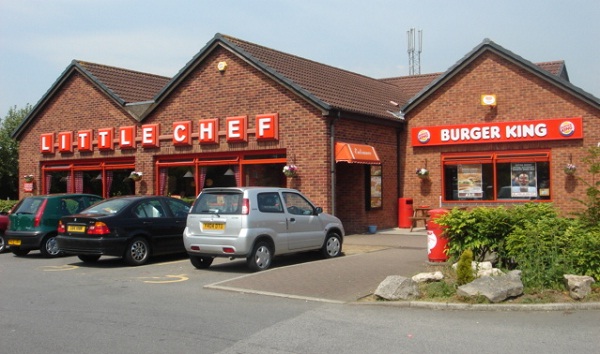 After a long and checkered history, Little Chef, the Britain’s 55-year-old restaurant chain, is back in the hunt for new owners. Home-grown fast-food and coffee-shop retail chains, including Costa Coffee, McDonald’s Corp. and KFC, are in the race to own the prime real estate – Little Chef.

Little Chef, easily identified by its Fat Charlie logos, was once the hallmark of the Britain’s quintessential restaurant scene. Dating back to 1958, Little Chef grew from  a small restaurant seating 11 people in Reading Berkshire to 234 outlets staffed by over 4, 000 employees. Millions of Britons began work on the ‘Olympic-size’ fried breakfast, steak, baked potatoes and ale pies. However, following a sudden collapse in 2007, the number of outlets fell drastically to just 1,100 staff and 83 sites catering around 6 million consumers. A numbers of owners, of the likes of Permira, another privately held equity group, tried to revive Little Chef back to its iconic standards, but failed. In 2009, attempts were made to restructure the restaurant by roping-in Michelin-star chef Heston Blumenthal to introduce new dishes on the restaurant’s menu. But it appears that Little Chef is not yet out of the woods entirely.

In over the six years that RCapital, a privately held equity group, has owned Little Chef it has been successful in bringing a flip-flop in both operations as well as the finances of the chain. It has also repositioned Little Chef and brought the group of companies into better profit making ways. Now, RCapital feels it is time to move on and give Fat Charlie a broader scale of operations and to take it to the next level.

Interestingly, RCapital has been categorical that it will sell the restaurant-chain to an entity that would perhaps retain some of the Fat Charlie’s along Britain’s A-roads, while repositioning some of the sites within the chain.

While deciding to sell Little Chef, RCapital claims that the dramatic changes in the market with more and more footfalls favoring fast-food retailers and coffee-houses over Little Chef restaurants have been the reason for fall in performance of this veneered restaurant chain.

Little Chef Restaurant chain is soon-to-be bought by any of the three giant fast food chains currently in the race to own a piece of Britain’s restaurant history.

RCapital, considered being high-value turnaround specialists themselves, has seen no future for Little Chef in its current format.  They have not placed a sale value either. RCapital has also sought the services of KPMG to help sell the company. However, it is expected that the Fat Charlie’s sale negotiations are completed before the end of summer this year.

It is a matter of time before it is known which of the triad – Costa Coffee, McDonald’s or KFC – offered RCapital the winning proposal. RCapital has repeatedly stated that is very fond of retaining at least some of the Little Chef outlets at historic and prime real-estate points.

Christy Gren
Christy Gren is an Industry Specialist Reporter at Industry Leaders Magazine she enjoys writing about Unicorns, Silicon Valley, Startups, Business Leaders and Innovators. Her articles provide an insight about the Power Players in the field of Technology, Auto, Manufacturing, and F&B.
« Facebook Phone flops in US, will not debut in UK
Annihilation of UK High Street nears as one in five stores to close »
Leave a Comment
Close

The iPad manufacturer has previously sought to remove China as the main Apple manufacturing country. Trade tensions and a strict Covid-19 policy has previously resulted in supply c
17 mins ago