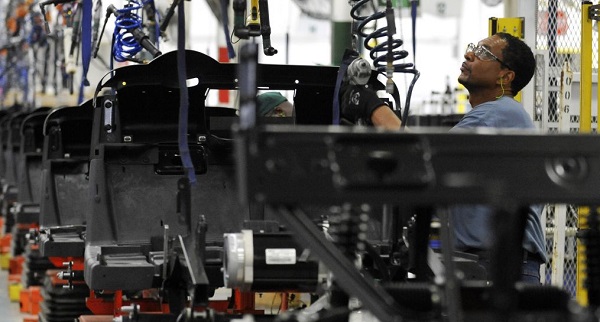 US factory activity slumped in March

National factory activity index showed that sequestering and taunt fiscal policy slowed US economy in the first quarter one. Business News reports indicated that the slowing down of economy had begun much earlier and the March 1st higher taxes as well as government spending cuts to the tune of $85 billion further slowed the economy.

Industry Magazine concurs with reports by research groups such as ISM (Institute for Supply Management) on the national factory activity. According to the findings, the index on the national factory activity slumped to 51.3 in March from 54.2 a month earlier.  A probable reason for the drop could also be that the spate of new orders was actually pulling down the overall index.

The manufacturing sector factory activity index is believed to have crested 50, predicting further expansion in the industry.

However, the reports by ISM appeared to be in direct contradiction with surveys that reported strong growth rates due to the increase in volumes of orders. Some of the surveys also indicated that it was probably one of the best financial quarters for this sector in over two years.

Reports by other insitutes

Research and analysis by some of the other leading institutes also indicated sectoral growth in manufacturing and purchasing. The result published by Markit on its Manufacturing Purchasing Managers Index demonstrated that it jumped to 54.6 in March 2013 from 54.3 in February 2013.

However industry leaders and experts suggest that though both the surveys did use the same index properties, the weightage they assigned to each component varied. Perhaps the contradiction in the financial data on these sectors was due to these differences.

The ISM result is more accepted because of ISM being an established industry analyst, and is often the source for several industry leaders to provide insight and in-depth analysis.

For investors, the news is that the cut-backs by the government will soon have an impact on various industries and will probably impact demand. Experts opine that in the sectors where sequestration will come into effect there will be correction, in the form of adjustments.

US Factory activity good in Q1

Data to analyze factory activities in the country are collated from the US Labor Department. Its March report is likely to offer a better understanding of the previous quarter.

In the context of Factory Activity, the rate of growth slowed in the previous month. However, with the increase in the number of export orders, there were high-performance records as well as a substantial increase in the employment levels in factories since June.

Though, inventories were believed to be lean, it was also suggestive of the likely increase in activities in the later parts of the year.  In news from other industries such as the Construction Industry the indices showed an increase in spending in February.

How will Q2 pan out?

Most industries have quickly revised their growth estimates, following revisions made by economists in the growth rates for January – March. Interestingly, construction, housing both residential and private non-residential are widely expected to climb.

Anna Domanska
Anna Domanska is an Industry Leaders Magazine author possessing wide-range of knowledge for Business News. She is an avid reader and writer of Business and CEO Magazines and a rigorous follower of Business Leaders.
« Small revolution in HP as Chairman Lane resigns
World’s Most Luxurious Private Jet. Interested? »
Leave a Comment
Close