Social networking site Facebook Inc is officially removing Messenger from its main Android and iOS apps. Users will be required to install a separate messaging app to get their FB chat on, the Internet company said on Wednesday. 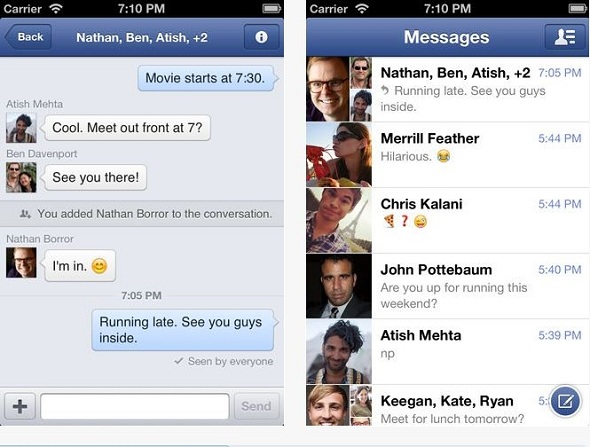 Technically, Facebook isn’t taking Messenger completely away from the main app. The message icon will still there, but users will likely be directed to a separate Messenger app every time they tap on it. Though this may not sound like a big deal, but to Facebook users who dislike change, this might be quite annoying.

On Wednesday, Facebook started notifying users in the European countries of the upcoming change and soon it is expected to happen in the rest of the world. Once users are notified, they will have round about two weeks before they will be required to download the standalone Messenger app and will receive multiple prompts until they download Messenger. Eventually, all Facebook users will compelled to use Messenger for their Facebook chat needs and the app’s current chat tab will entirely be removed from the Facebook app.

Facebook said the transition is designed to ensure that users have an unswerving and superior quality experience. The free, standalone Messenger app is faster compared to the chat service that’s currently built into Facebook’s primary mobile app. Facebook users will also be able to access additional features in the Messenger app, such as the ability to make voice phone calls.

Not all will be required to download the Messenger. Older Android phones with particularly low memory capacity will be able to continue chatting within Facebook proper; as will Windows Phone and tablet users for the time being won’t be required to shift away from main app for chatting. Facebook Paper, the company’s new news-focused redesign, will also have in-app messaging.

Facebook is attempting to make the change as easy as possible by making Messenger far more compelling as a separate product. Integrating VoIP calling, group chatting and image sharing is just the beginning of what the company wants to be an ecosystem of chat apps that span every computing platform. In the coming weeks, a tablet version of Messenger is expected for iPad. May be Android users can also benefit from the transition, as the core app will be smaller and hence load faster.

Facebook, with 1.2 billion users of the networking service has off late moved to build a catalog of standalone apps to compliment its primary app. In January, Facebook unveiled Paper, a photo-heavy news-reading app that has earned good reviews.The recent acquisition of WhatsApp, a messaging app, by the Facebook can also be integrated in the upcoming releases of the Messenger app.