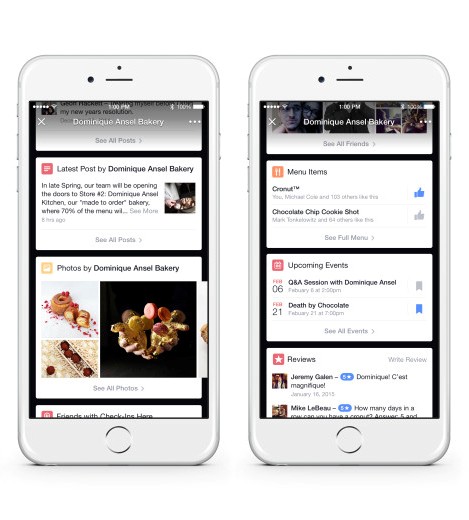 Place Tips appear as a notification at the top of the News Feed.

Social networking giant Facebook updated its mobile app Thursday with a new Place Tips service that offers a range of content, information and recommendations about places in the real world. The new feature is aimed directly at apps like Yelp or Foursquare.

Place Tips appear as a notification at the top of the News Feed. The new tool will surface posts and photos friends have shared about the place, upcoming events from that location’s page on the network, popular menu items and other tips. Facebook is making Place Tips a default feature; users can also hide Place Tips for particular locations.

The new tool could escalate the number of people who access Facebook on their smartphones and enhance the company’s already growing mobile advertising revenue.

As of December, mobile monthly active users on Facebook hit 1.19 billion and mobile advertising made up about 69 percent of the company’s fourth-quarter ad sales.

Place Tips is also interesting because it’s not an app and including Place Tips in the main Facebook app makes sense. Facebook seems to have realized it will get more number of people using the feature if it just bundles it into the Facebook app.

Users normally don’t like switching between apps, and spinning off Place Tips would cause it to directly compete against services like Yelp and Foursquare. With this new move, Facebook users will be encouraged to test out the feature, no additional app needed, and it could end up poaching off some Yelp and Foursquare users who also use Facebook.

Some smartphone users will have to wait for some time to use Place Tips. It’s currently only available on the iPhone app and uses cellular networks, Wi-Fi and GPS to pinpoint a user’s location.

For now, Place Tips is only rolling out at major New York City landmarks, like Central Park the Brooklyn Bridge, Times Square, the Statue of Liberty, and JFK Airport. There is no time set for when it will be launched to places and users in other parts of the world.