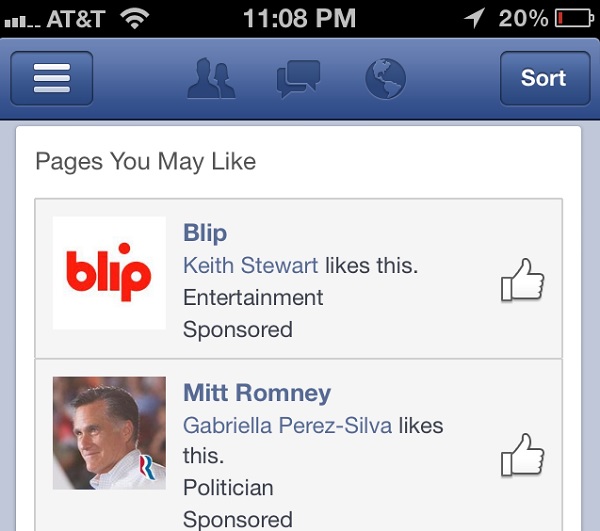 The social networking company shares soared in after-hours trading yesterday. Its mobile advertising sales advanced it to a stronger-than-expected quarterly profit from virtually nothing a year ago to 41 percent of its total ad revenue of $1.6 billion in the second quarter.

Facebook‘s profit surged in the second quarter, as sales rose 53% to $1.81 billion, pushing the stock up about 19% after-hours trading. Its mobile business made $656 million in sales, or 41% of its advertising business, a rise of 11 percentage points from the previous quarter. The company posted a profit of $333 million, or 13 cents a share, compared to a $157 million loss in the same period a year ago, surpassing analyst estimates. Analysts were expecting sales to grow 37% to $1.62 billion.

“I’m very pleased with the results,” CEO Mark Zuckerberg said on a call with analysts.

“Facebook has nearly 700 million people that use the platform daily. There’s no bigger audience on the planet,” said Jordan Rohan, an analyst at financial services firm Stifel Nicolaus.

Consumers and advertisers growing appeal for Facebook combined it to deliver the company’s strongest ad revenue growth since the third quarter of 2011. Ad prices, which diminished at Google and Yahoo, augmented 13 percent at Facebook. It said revenue from e-commerce companies doubled year-on-year in the second quarter, and the total number of ads displayed on its service expanded by 43 percent year-on-year.

Mark Zuckerberg, said the company was beginning to reap the benefit of investments to reconstruct certain products over the past 18 months, particularly the mobile version of its service.

“Coming into this year we could tell internally that we were turning a corner on that, that we were in good shape and could start to play a bit more offense,” Zuckerberg said in a conference call with analysts on Wednesday.

With smartphones being mainly used by consumers to access Web services, whose smaller screens make it more difficult to display ads, Internet companies have strived to adapt their businesses.

“Facebook is uniquely positioned because of the way consumers consume their content to show these types of ads,” said Macquarie Research analyst Ben Schachter. “More and more people are finding that this is a useful place to show ads,” he said.

Facebook said about 61 percent of its 1.15 billion users now log in on a daily basis, compared to 58 percent in the second quarter of 2012. The number of monthly active users jumped 21% over the period to 1.16 billion. The increase came in spite of worries that in-feed ads will devolve viewers, and that an assortment of mobile services which are popular among a younger crowd, such as Snapchat, would siphon off users.

Zuckerberg said Facebook remained popular among teen demographic, noting that the number of teen users in the country on a daily and monthly basis had been steady over the past year and a half.

Facebook is still spending huge sums to up its mobile business. The company’s cost and expenses came in at $1.25 billion in the second quarter, less than a year ago, when it spent $1.93 billion. In spite strides on mobile, Facebook still holds a small slice of the greater digital advertising market. According to data from eMarketer, it is just 4.1% of the $104 billion market.

Anna Domanska
Anna Domanska is an Industry Leaders Magazine author possessing wide-range of knowledge for Business News. She is an avid reader and writer of Business and CEO Magazines and a rigorous follower of Business Leaders.
« Watch out! Your bottle of Pepsi might be serving you cancer causing Carcinogens…
Coffee in space: Zero gravity cup help astronauts drink coffee in space »
Leave a Comment
Close