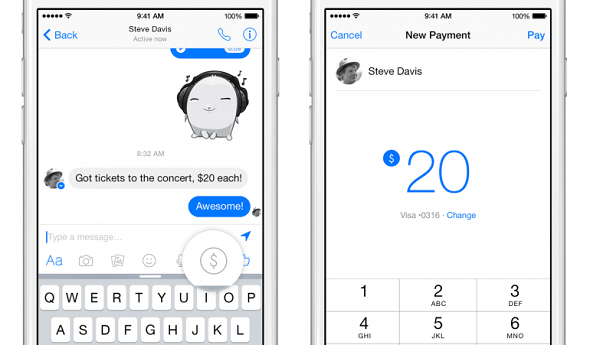 In March, Facebook introduced its new payments services, and now, on Wednesday, it has begun to roll out its new payment services that will allow users to instantly pay or receive money from friends through Facebook Messenger. Facebook’s new payment feature is a part of its roll-out approach that will be made available in New York City areas, with an aim to ensure a high-quality experience for users with a few payment functionalities.

Facebook’s new feature allows a person to send and receive amount instantly by using Facebook Messenger app on Android and iOS smartphones, as well as on the desktops, which was previously made available in a few regions of the U.S., including Portland, Austin, and Seattle.

The peer-to-peer service works with Facebook Messenger app that is not meant for users to pay for their online shopping purpose, but rather, to pay an individual via chat threads. Facebook said that the new payment feature is also receiving a handful of updates that are designed to make payment process easier to use than before.

Earlier in March, Facebook announced its intensions to expand further into the payment business, with a planned and strategic business move, which could potentially pitch popular payments apps like, Venmo, and PayPal. The later is a social payment app that Facebook uses to help individuals find, and pay their friends.

By introducing person-to-person payment services, Facebook introduced a new way for users to connect via Visa debit cards or MasterCard with Facebook Messenger, and then tap on a dollar-sign button to sent money to their friends. Now, the dollar amount sign sent in Messenger conversations will get automatically hyperlinked, so that, when your friend taps on that button, it will kick-off a payment for that amount to the person you are texting.

In case of any accidental clicks, Facebook’s new feature allows sender to confirm the payment before sending. This feature is equivalent to how phone numbers, addresses, and web URLs are already linked, when shared in app Messenger.

Facebook said that the payment services will work in group chats, too. Before that, a person would have to disappear from the group conversation to send money to an individual, but, going forth, they’ll be able to pay their friend within the group on the desktop, while others will only be able to view this payment , including who paid to whom and how much.

Currently, the payments are only available to individuals, and not for business purpose, though it makes somewhat sense for Facebook, who thinks that it should to be considered in the near future. However, the company revealed that the tool is not designed for any commercial purpose.

With its new featured app, Facebook considers New York as the first metro area to receive Facebook Messenger payments, but aims to expand its peer-to-peer payment feature more broadly across the nation in the coming months.