In an effort to boost Internet usage in underdeveloped countries, Facebook-backed Internet.org announced that it is launching a new Android app in Zambia that gives Airtel customers access to a handful of online services on their mobile phones without incurring any data charges.

“Over 85% of the world’s population lives in areas with existing cellular coverage, yet only about 30% of the total population accesses the internet,” Internet.org product management director Guy Rosen said in a statement. “Affordability and awareness are significant barriers to internet adoption for many and today we are introducing the Internet.org app to make the internet accessible to more people by providing a set of free basic services.”

Although the service will initially be limited to only Airtel users in Zambia, the app will be made available in additional countries over the coming months and years, Guy Rosen said in a statement. 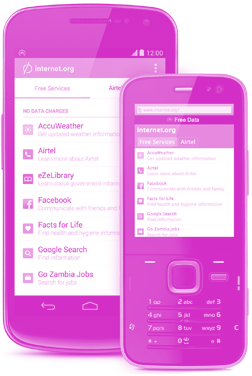 While Facebook will not pay Airtel for the cost of the data, Airtel will benefit as users who try out the internet on a mobile will decide to pay for broader, unrestricted access in the future. Users will need to visit the internet.org website to access the web services. Of the 15 million population in Zambia, only 15% of them have access to the internet, now it is expected that more people will try it. If the initiative is successful, similar method will be used with other mobile operators in other parts of Africa.

Accessing information about the services that are included in the app is free, but links that lead to information on other websites will require that users pay wireless data charges. Also the app does not allow video playback in the free version of Facebook.

Over the past four years, Facebook has teamed up with more than 150 wireless providers to provide free or discounted access to its social network, but the new app in Zambia marks the first time the social network has included web service to the menu of free services.

The initiative has the ability to enhance the size of Facebook’s community, which at present adds up to nearly 1.32 billion monthly users.