Social network giant Facebook reported on Wednesday that its profits almost tripled in the first quarter of 2014 which was hugely driven by a surge in advertising revenue. The web giant boasted that its mobile user base surpassed the one billion milestone. 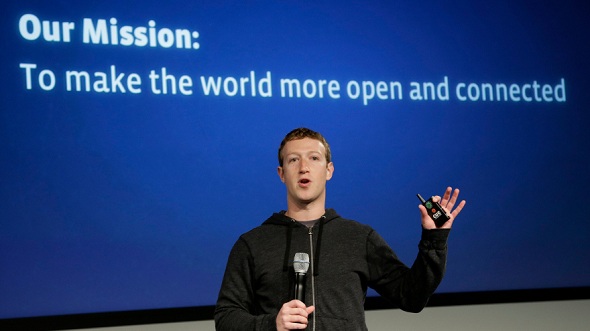 In its earnings call, Facebook reported that first quarter revenue rose by 72% to 2.5 billion dollars  from 1.46 billion dollars last year. Advertising revenues were up 82 percent to $2.27 billion from a year ago. This was mainly due to mobile advertising, which was responsible for 59% of advertising revenue for the first quarter of 2014, while a year ago mobile ads were less than one-third and three months back they were 53 percent. Facebook said net profits jumped to $642m, from $219m in the first three months of 2013, a sharp rise of 193%.

Earnings came in at 25 cents per share; adjusted earnings jumped to 34 cents per share, beating the  analyst’s expectation which was around 24. Facebook shares, which had increased in the days ahead of the report rose 3.8% in after-hours trading after losing $1.67 a share to $61.36.

There are nearly 1.3 billion monthly active users of the website, which is up 15% year-on-year and around 800 million people logged on to the website each day which is up by 21 percent from a year ago. Out of that, mobile users totalled 609 million, a year-on-year gain of 43 percent. The rise in profits comes in spite of the recent buyouts, like that of instant messaging service WhatsApp.

The mobile device market is an important area for Facebook, and by acquiring WhatsApp, the company has showcased its resolution of staying relevant in that sector. It also recently purchased virtual reality headset maker Oculus VR, developer of the Oculus Rift headset that is considered as the future of gaming. Zuckerberg said that the company is working towards developing new apps to help users share a lot of content in many different ways.

United States and Canada are the best earnings on mobile ads, while the European advertisers have now begun to recognize its importance as a mainstream path for reaching people. In the first quarter  total revenues $1.18 billion came from the US and Canada and around $700 million from Europe.

Facebook also announced that its chief operating officer David Ebersman will be stepping down after a stint of five years. He will be succeeded by David Wehner, who at present serves as Facebook’s vice president of corporate finance and business planning.