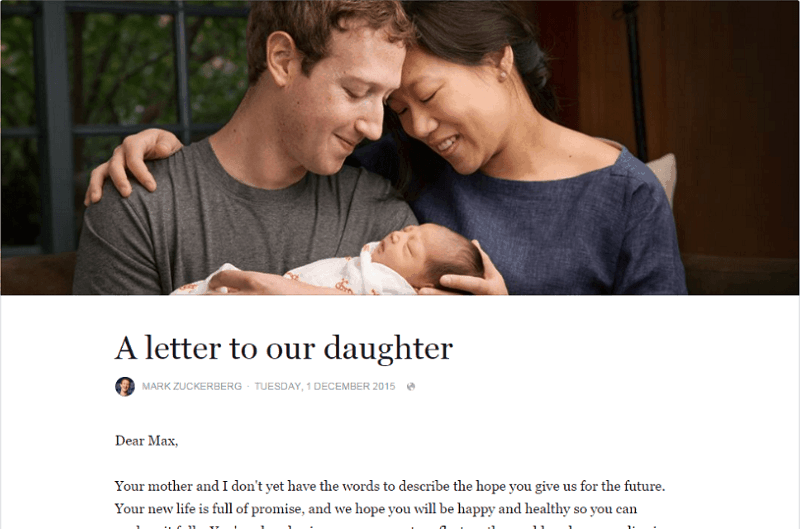 Facebook CEO Mark Zuckerberg is not just the biggest name in the tech world and a father; he is now regarded as one of the biggest philanthropists as well. Zuckerberg is giving away enough donations to fund the biggest charities in the world for the next 45 years, but he prefers to fund his own. The Chief Executive of the largest social networking website made an announcement addressing his newborn daughter, about his plans to donate 99% of Facebook shares that are under his name, worth $45 billion projected by current valuations. The revenues will funnel through their “Chan-Zuckerberg Initiative” that Zuckerberg will lead with wife Priscilla Chan. The initiative will focus on world improvement for next generation, and Facebook CEO considers this as a moral responsibility to incline his investments. The organization will be functioning as an LLC philanthropy, in which they will be reinvesting their profits and revenues into non-profit groups to boost its mission. Facebook CEO Mark Zuckerberg is not just one of the richest people on earth, he also an industry leader, as his website is the widely used website on planet Earth. At least 1.5 billion people across the world are using Facebook. Facebook Chief Executive’s own page is followed by no less than 42 million Facebook users. The remarkable growth of Zuckerberg in the public eye has been responsible for making Facebook as the dominant in the giant world of social media. This generosity by Facebook CEO Mark Zuckerberg will help in cementing his role as one of the most generous philanthropist and donors in Silicon Valley. This initiative could help bolster the reputation of his company in the technology community, which has been subjected to numerous criticisms for exacerbating wage inequality and driving up rents in Silicon Valley. The donation could set a high bar in return driving more money for philanthropic endeavors. Zuckerberg and his wife already donated $1.5 billion in the form of Facebook stock to SVCF, Silicon Valley Community Foundation. The latest addressing by Facebook CEO Mark Zuckerberg on his initiative also hints that the social media giant’s boss wants to heartily avoid the pitfalls, which typically badass business moguls turned benefactors do. It seems that the Social media baron has learned a lot from his previous attempts at philanthropy. He feels that they must back the most independent and strongest leaders in every field. According to him collaborating with experts turns out to be pretty much effective rather than trying to lead efforts for a mission on own. Rather than giving funds to existing non-profits, industry leaders, nowadays, are increasingly milking their fortune in their own organizations. This is not the first time when a business leader has come up with such huge initiative. Bill and Melinda Gates run a huge foundation. Warren Buffet has donated half of its assets to such cause, and recently he donated $2.8 billion to Bill and Melinda Gates Foundation. Founders of GoPro, Nicholas Woodman, and Jill Woodman, announced a donation of $500 million to the Silicon Valley Community Foundation. Jan Koum, Co-founder Whatsapp, which now comes under Facebook, also pledged $500 million to SVCF. Founder of Napster, Sean Parker, who happens to be a previous Facebook executive, committed $600 million to a foundation of his own, which aims at improving public health, life sciences, and civic engagements. Google Co-Founder Sergey Brin donated $383 million to foundation led by his own family, which helps in eradicating poverty in regions of San Francisco. His partner, Google Founder Larry Page joined the league by donating Google stocks of valuation worth $177 million to his foundation, which focuses on medicines and education. We are excited to watch this chief executive navigate the complexities of being a parent while ruling one of the biggest companies in the world. Already, he has come out very bravely by making bold statements regarding parenthood in the modern age, from sharing struggles of his wife’s several miscarriages to addressing his plans for taking paternity leave of two months, which happens to set a precedent about the necessity and importance of leave related to the family. One thing is sure that the very new gesture by Zuckerberg on the arrival of his newborn will woo people across the world. But there is an important question that still lies pending! Will Facebook CEO Mark Zuckerberg keep updating his status every time his baby cries, or changes her diapers, or set up a Facebook page of hers like he did for his pet Beast? Especially, will he post one zillion Selfies and pictures of his daughter on Facebook too? After all, even after being a tech mogul, he is normal human just like us.