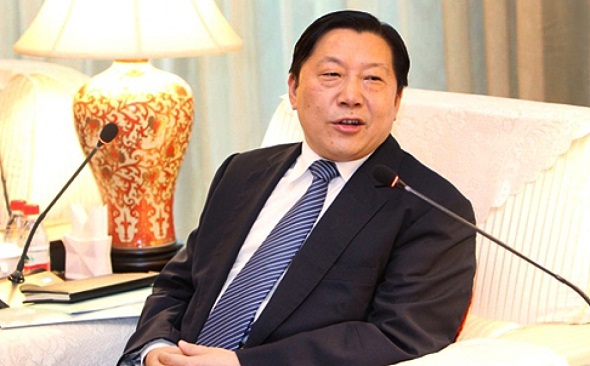 Lu Wei, China’s top regulator is enjoying the Menlo Park hospitality even as Facebook remains banned in the communist country.

According to a report and pictures posted on a Chinese government website, head of China’s Internet regulator met with the CEO of Facebook Inc., Apple Inc., and Amazon.com Inc., during a recent visit to the U.S.

Lu Wei, minister of the Cyberspace Administration of China, visited some of the top technology firms in Silicon Valley, pictures of which were posted by China.com.cn, which falls under the State council. The report did not divulge details on the purpose behind the visit or the dates. The post, however, included photos of Lu along with Apple CEO Tim Cook, who appears to be showing him a wrist-worn device.

Lu was welcomed in Mandarin by Facebook CEO Mark Zuckerberg who also happened to have a copy of Chinese president Xi Jinping’s book “The Governance of China” on his desk at that moment. The flagship social network had been blocked by China’s censor’s way back in 2009. Facebook is currently trying to develop its business of selling ads to companies through a Hong Kong office and is reported to have rented space in Beijing.

China continues to be one big hurdle in Zuckerberg’s long-standing vision of connecting the entire population of the world. It is widely known that the youngest billionaire desires to enter that market that has more than 600 million Internet users. Lo Shih-hung, a professor at the National Chung Cheng University’s Depart of Communication in Taiwan expressed his delight in the visit. “The Chinese market is too attractive not to be in,” he said, adding that for Facebook to enter the Chinese market, it may oblige them to make certain compromises such as setting up a local operations office to even sharing user data.

Zuckerberg was recently named to an advisory board at Beijing’s Tsinghua University in October, revealed to Lu that often lend’s Xi’s book to colleagues to make them more aware of the characteristics of Chinese socialism.

Lu has repeatedly defended China’s Internet censorship as a vital step crucial for maintaining domestic stability. “If you are hurting China’s interests, China’s security or you are hurting the interests of Chinese consumers, we won’t allow this to exist,” Lu said at the World Economic Forum in Tianjin in September without naming Facebook.

Pictures of the visit also showed a stuffed bunny mascot for Beijing-based Xiaomi Corp., world’s third-largest smartphone company on Zuckerberg’s desk at Facebook. Lu was accompanied by Zhu Guang vice president of Baidu Inc., to the meeting as per the report on the website, which also posted pictures with Amazon CEO Jeff Bezos.