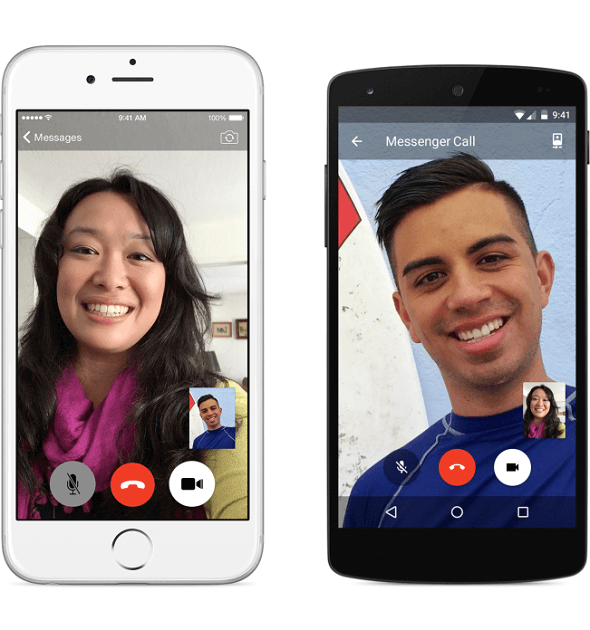 Facebook messenger app users from now on, can message, call and talk face-to-face with their friends or relatives with a single tap in the application.

Earlier, video calling feature in Facebook was only available with the PC users. Now with the latest update, the social networking giant has introduced free video calling in its mobile messaging platform as well.

According to reports, the new feature is currently available to only Android smartphone and iOS users and connections are device-agnostic, one person can be using an iPhone and the other can be using an android device. Facebook messenger app users from now on, can message, call and talk face-to-face with their friends or relatives with a single tap in the application.

Messenger has a video icon at the top right corner of its screen and users can start conversations by clicking on the video icon. They must be started from an existing Messenger conversation.

The new feature has a striking similarity with functionalities already offered by its leading competitors, including Apple (FaceTime), Google (Hangouts) and Microsoft (Skype).

The launch of the video calling feature covers several numbers of countries, including the U.S. Canada, Belgium, Norway, Poland, Portugal, the U.K., Mexico, Nigeria and Oman. Facebook said that the feature will be rolled out to other regions and locales in the coming months.

Though there was some initial rejection when Facebook disbanded Messenger as a separate app from its main mobile application, it has proven to be a popular product. Nearly 600 million people currently use Messenger, and the app accounts for over 10% of all voice over IP calls around the world.

While Facebook will not earn any revenues directly from its video calling service, the feature will help the networking giant in maintaining a tight hold on the communication habits of its users, which in turn is directly linked to the company’s advertising goals.

Besides rolling out video calls, there are other additions to the Messenger app, including the ability of users to send money to each other and the announcement of the Messenger platform that enable other developers to create applications that incorporate Messenger.

The primary challenge for video calls is that they are not as guarded and quiet as texting or instant messaging. Users might find it difficult to use any app’s video calling capability in class or a library and also when walking down a busy street.

And unlike video calling, typing messages creates a record of a conversation made by the users. Currently there is no mechanism for recording Messenger video calls, and also no indication from Facebook that such a feature might be introduced in the future.

Almost half of the marriages end in divorce is an oft-quoted adage, but surprisingly, this is not true in today’s world. The reasons are varied, gender equality, the higher p
21 hours ago

JPMorgan Chase, the largest U.S. bank by assets, has appointed two new executives to head its information units in a bid to make its workforce more inclusive and increase racial an
22 hours ago

The U.S. solar industry witnessed a 7% cut in jobs due to the coronavirus and increasing use of labor-saving tech in the industry, according to an industry report. Job decline is n
22 hours ago