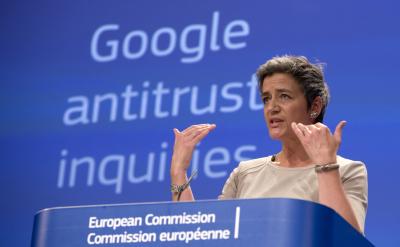 The European Union to record antitrust charges against Google

The European Union is set to file formal charges against Google for illegally using its dominant search engine to highlight the company’s own online services over others.

European Union commissioner, Margrethe Vestager is expected to make an announcement on Wednesday in Brussels about Google violating antitrust laws and has decided to pursue a case that will challenge Google’s illegal practice.

The case against Google would be one of Europe’s biggest antitrust cases since regulators went after Microsoft. The search giant holds around 90% share in Europe’s search market. If the European Union is successful in making its case, the U.S. tech company could risk massive fines and enforced changes in its business model to give smaller competitors such as Yelp greater prominence in its search queries.

The investigation has been going on since the last five years at the European Commission without a negotiated settlement or formal charges. That delay has evoked condemnation that the region’s most significant antitrust enforcer has been going too easy on Google.

Europe’s focal point of investigation is whether Google has abused its search engine’s large market share by diverting traffic from rivals to favor its own products. Google is more dominant in Europe than in the United States, where rivals such as Microsoft’s Bing still hold a substantial market share.

Vestager, who took over as Europe’s top antitrust official in November will go all the way to Washington later this week, where she will be meeting senior justice officials and participate in antitrust conferences.

Several organizations and companies have filed antitrust complaints against Google in Europe. Most of them are in Germany, where influential publishing groups and online firms have called on the European regulator to bar the U.S. search giant from obstructing competition in segments such as online mapping, travel services and shopping.

If the charges are demonstrated, Google could face fines of up to $6.6 billion (6.19 billion euros), almost 10% of Google’s most recent annual revenue. Former European Union commissioner Joaquín Almunia offered the search giant three opportunities to make concessions that were aimed at allowing them to settle in these sorts of cases in order to evade long fights in court.

The European Commission has so far rejected concessions offered by Google and its competitors including, Microsoft and Yelp has complained that most of the changes proposed by the search giant have been insufficient to solve the antitrust concerns identified by regulators.

Vestager has been pressurized by the European Parliament to expedite a decision after lawmakers passed a nonbinding resolution in 2014 calling on her to consider breaking up Google.

The antitrust case is among several regulatory issues that Google faces in Europe. Local policymakers have also condemned the search giant for its tax practices and how it manages people’s online privacy.

Anna Domanska
Anna Domanska is an Industry Leaders Magazine author possessing wide-range of knowledge for Business News. She is an avid reader and writer of Business and CEO Magazines and a rigorous follower of Business Leaders.
« Nokia in advanced discussions to buy Alcatel-Lucent
Segway acquired by Ninebot, Xiaomi-backed Chinese start-up »
Leave a Comment
Close