EU Privacy Fine, EU Antitrust Probe; Spill it out Google what settlement next?

In 2012, Google has disclosed a universal privacy policy across, designed specifically to address its uses and how it shares user data across all of its various platforms. The new privacy policy defied European privacy law set by European regulators from various countries. Various countries have resolved to take Google to task for violation of their individual data protection laws. 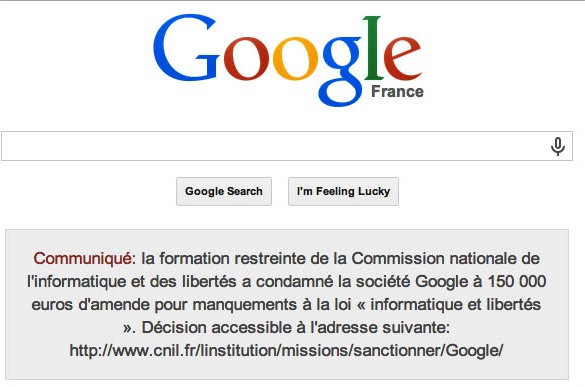 Google Forced To Notify Users of €150,000 Fines on Its French Homepage

Google Forced To Notify Users of €150,000 Fines on Its French Homepage

Google’s lawyers argued that it could lead to irreversible damages to the company’s reputation especially while it is appealing to re-examine the case. However, Conseil d’Etat (Council of State) France’s top administrative court ruled out on the company. For the next six months, the site’s homepage will contain the required statement at a size no smaller than 13 in Arial font to notify users that it had been fined for violating the countries privacy laws.

In December, Spain’s watchdog has imposed fines of $1.2 million on Google for violating the country’s privacy laws. Google is currently under investigation with four other countries including Netherlands, Germany, Italy and the UK which could lead to further fines and permits.

Apart from the privacy concerns raised by various countries, Google is also under the spotlight for antitrust laws. The case arose when companies including Microsoft and TripAdvisor argued that Google has abused its position as a prominent search engine. Google has now offered to provide comparable treatment to its rivals. The company has also been accused of providing favorable treatment to its own products in search results.

Google has also promised to make noteworthy changes to the way rivals appear in search results, following a three-year investigation by the European Commission. The changes can tentatively save up to $ 5 Billion of fine.

Anna Domanska
Anna Domanska is an Industry Leaders Magazine author possessing wide-range of knowledge for Business News. She is an avid reader and writer of Business and CEO Magazines and a rigorous follower of Business Leaders.
« Iceland Successfully Harnesses Energy Directly From Magma
Practical, fluid and cool: The Apple iWatch »
Leave a Comment
Close