Entrepreneurs Under 30: Catherine Diyakonov on Fighting the Gender Stereotype

“Talking about what we should do to achieve gender equality is a critical first step, but gathering a group of like-minded individuals to act upon these issues is even more important,” says Catherine Diyakonov, Founder and President of Girls Will Stay.

Even a speck of gender bias could lead to dramatic underrepresentation of women in STEM and leadership roles. Catherine Diyakonov, Founder and President of Girls Will Stay, talks about taking the lead in breaking gender barriers in the world. 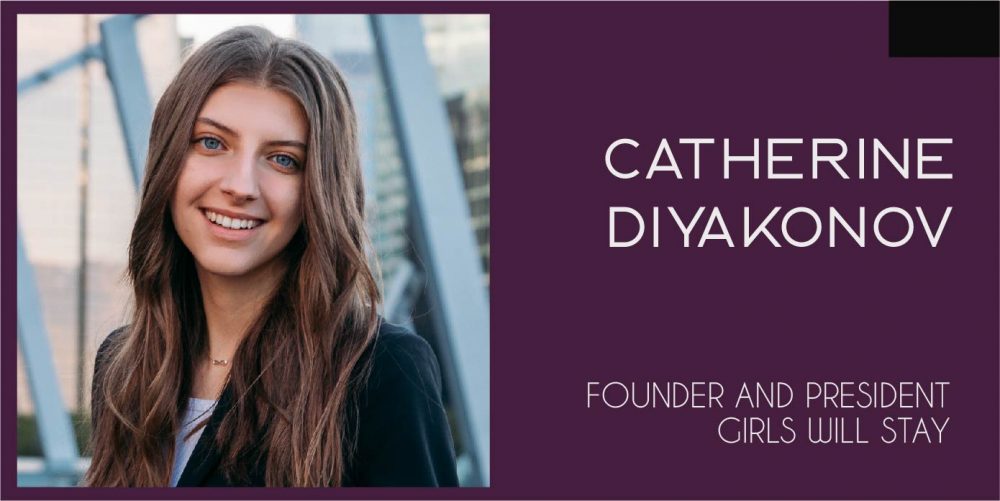 Industry Leaders: You managed to work for women through ‘Girls Will Stay’ at such a young age. What inspired you to stop gender stereotypes?

Catherine Diyakonov: I have noticed gender stereotypes evolving from as early as a little girl. In stores, I started to notice that many toys targeted towards girls were ones to do with dolls and making bracelets, whereas the toys targeted towards boys were science-related, such as making volcanoes and conducting experiments. In elementary school. I think back to a time we dissected frogs in science class. I was so keen to start, as the whole process was fascinating. However, I noticed my friend was shying away from the frog. When I looked around, I found that many of the girls looked simply disgusted. However, the boys were fascinated by the frog’s digestive juices! This moment didn’t resonate with me for a couple of months, but I soon started noticing that I was the only girl in various math Olympiads. When I attended lectures with guest speakers, I noticed that the guest panelists were often male-dominated. When I noticed these stereotypes evolving from such an early age, I knew I had to make a difference.

Industry Leaders: Can you name a few good or bad observations about the society while representing women in the STEM field?

Catherine Diyakonov: Representing women in STEM has made me realize how supportive many individuals are in our endeavors. It is incredible to hear how many people resonate with our mission, as well as how many young girls are impacted by seeing women in STEM-related fields. On the other hand, I have realized that society can certainly be judgmental of women in STEM. Some people become visibly confused when a woman loves both fashion and STEM. However, these stereotypes are something I am determined to break.

Industry Leaders: What possible outcomes do you feel can be achieved if women kept fighting back against stereotypes?

Catherine Diyakonov: Fighting against the stereotypes women face in any setting will lead to gender equality! Not only will women be greater represented in leadership positions and break the gender pay gap, but they will also be role models to young girls who aren’t quite sure what they want to do in the future. Fighting back against gender stereotypes will inspire the next generation of girls to pursue any career they wish to go into, without thinking twice.

Industry Leaders: Your achievements are already imprinting hopes on the industry. What do you think can be done more to add to your success and social needs through ‘Girls Will Stay?

Catherine Diyakonov: I definitely hope to spread the mission of Girls Will Stay to communities across the globe, as well as encourage students to open Girls Will Stay chapters at their own schools! Talking about what we should do to achieve gender equality is a critical first step, but gathering a group of like-minded individuals to act upon these issues is even more important. Being a part of the Girls Will Stay Initiative will ensure that a visible difference is made for each and every girl struggling with staying healthy, being educated, having shelter, or fighting back against gender stereotypes.

This interview appeared in the December 2021 issue of Industry Leaders Magazine.

Christy Gren
Christy Gren is an Industry Specialist Reporter at Industry Leaders Magazine she enjoys writing about Unicorns, Silicon Valley, Startups, Business Leaders and Innovators. Her articles provide an insight about the Power Players in the field of Technology, Auto, Manufacturing, and F&B.
« Rising Stars: An Interview with Areva Martin on Empowering Women at Work
Volume of private equity deals hit new record in 2021 »
Leave a Comment
Close