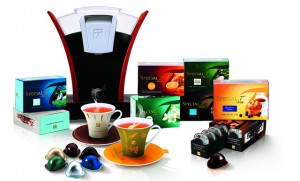 Just as Nestlé breathed relief earlier this week on winning a court battle to ban a look-alike rival product in its high-margin Nespresso business, it felt a massive jolt with news of a former Nestlé executive launching a new premium tea-making system in obvious competition with the Swiss food group’s own recently launched product, Special.T.

Eric Favre, who launched Nespresso in 1986 and is chairman of Tpresso unveiled his product at an event in Beijing, China on Wednesday.

Care for some Tea? Tpresso!

The increasing number of competitors entering the premium hot beverage market with their own systems has managed to keep the world’s largest Food & Beverages company, Nestle, on its toes. But this competition reached an absolute boiling point on Wednesday, as Favre, Nespresso’s founding chief executive who has since gone independent, unveiled Tpresso, a capsule-based tea system, which he is confident will become “the Nespresso of tea”.

“Certainly Tpresso can become the Nespresso of tea, probably in even less time because people are now used to the idea of using machines and capsules,” Favre said in an interview. “There are tens of millions of customers in China and four times that in the rest of the world,” he said.

Last September, Nestle launched a tea-making system, called Special.T in France and Switzerland, and the company revealed in a news release that the first signs from the launch were promising, although no specific figures have been released yet. “We are now focused on building up the future of this product in these markets,” said Nestle spokeswoman Nina Caren Backes at the time.

Favre, who is also chairman of Monodor, a private Swiss company which supplies coffee capsules and machines to retailers across Europe, said he is not concerned about competition from other brands such as Special.T.

“Special.T is not the same product as Tpresso; it is not as premium. We have much better quality,” Favre said.

Favre has spent 18 years and CHF25 million developing his latest product, and worked with the Chinese Tea Board, the highest tea authority in the country, and Tea University in Shanghai. Acknowledging that it is impossible to keep other players out of the market, Favre said “What is more important is the know-how you are bringing to the product; the knowledge we have built up over several years gives us a great advantage,”.

Favre said the product would be aimed at young people who don’t have time to brew tea the traditional way, and Tpresso will also emphasize the health benefits of tea.

Tpresso will be sold to hotels, and luxury car dealerships as well as to businesses, restaurants and private households.

The first machines, which have been assembled in China, with technological parts made in Switzerland, Germany, France and Italy, will go on sale in China in April. Later this year Tpresso will be launched in Korea, Japan and Hong Kong, before coming to Europe.

Tpresso is also looking for distribution partners to launch the product, with Germany and Saudi Arabia among the likely first markets outside Asia.

With a price-tag of 5,0000 yuan (EUR635) for the tea making machine, special teapot and tea cups, and CHF1.5 to CHF3 per capsule, Favre stressed that it was a luxury product. He is hoping to sell up to 6 million capsules by the end of the first year.

The Nespresso of things

A commercial court in eastern Swiss city of St Gallen gave Nestlé an important legal victory on Monday by supporting its challenge to discount retailer Denner.

Denner had been selling Nespresso-compatible coffee capsules for about half the Nestlé price. While Denner said it would appeal, Nestlé’s victory raised the possibility of friction with Migros, the discount retailer’s parent, and Switzerland’s biggest food retailing co-operative.

Nespresso is one of Nestle’s billionaire brands. Sales of the product have grown by an average of 30% a year since 2000 and reached more than 2.8 billion Swiss francs ($2.88 billion) in 2009.

Nestlé’s determination to defend Nespresso, which it says is protected by 1,700 of patents, was demonstrated last June, when the Swiss group took legal action against Sara Lee for alleged patent infringement.

Sara Lee denied infringing any patents and said: “We are confident that our product complies with all legal and regulatory requirements, and are confident about the outcome of this case.”

Meanwhile, other coffee groups have continued to enter the market with their own systems. On Tuesday, United Coffee, one of Europe’s largest independent coffee companies, launched its own premium espresso capsule system.

“The market for high-end espresso capsule systems is being fuelled by demand for premium quality coffee and an overall trend towards convenience”, said Per Harkjaer, United Coffee’s chief executive.

While demand has been rising from increasingly affluent and quality-conscious consumers, foods groups have also been drawn by the big margins on premium beverage products.

Nestlé does not reveal figures for Nespresso. But the group hinted at the brand’s breakneck growth. Sales are expected to have exceeded SFr3bn ($3.08bn) last year, while analysts estimate profit margins are extremely high. To meet growing worldwide demand, Nestlé last year inaugurated a second Nespresso capsule factory, more than double the capacity of the initial plant.

The group intends to continue expanding Nespresso beyond its European base, targeting the US and Asia. Growth has been bankrolled by heavy marketing and the opening of Nespresso coffee bars, designed to boost brand recognition and loyalty.

The Last Word: Selling Tea to the Chinese AND Making money off it?

How about selling tea to the Chinese, who developed tea drinking and been drinking the beverage for more than 4,000 years?

Good news for Tpresso: “Experts at the Chinese board of tea have tasted it and they are convinced this level of taste has never been reached before,” Favre said.