Enbridge in rush to clean its oily mess in Wisconsin 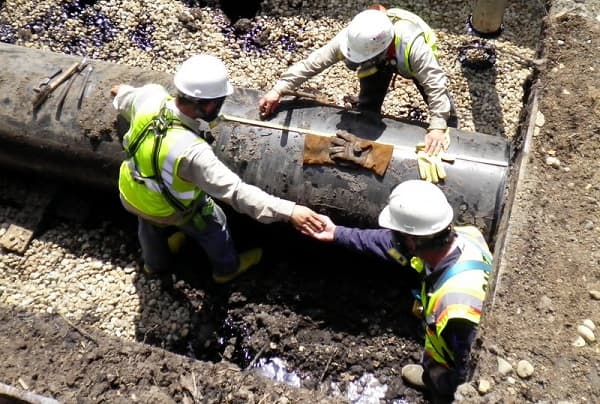 Canada’s Enbridge Inc. believes that on Monday a part of pipeline that leaked more than 1,000 barrels of oil in Wisconsin will be replaced. The anger and ire are rising so that the Enbridge is in rush to clean its oily mess. In addition, critics of the Northern Gateway pipeline have another point against building it, pointing out that it will be too risky for British Columbia.

One spill too much

Just two months ago Enbridge launched its new ambitious expansion program which is valued at $3 billion. And today after the newest spill incident, which is one of a few in the last couple of years, the company’s reputation is at risk. The Friday’s spill came almost exactly two years after the Enbridge incident in Michigan, where broken pipeline fouled the Kalamazoo River. The newest spill is the reason of the closure of a major conduit for Canadian crude shipments to the American refiners. Moreover the spill is believed to be a threat to the company’s reputation.

On Sunday, Enbridge informed that the new pipeline would be installed on Monday. At the same time the company was unable to pinpoint a cause of the spill and when the 318,000 barrels-per-day Line 14 would restart service. According to the Enbridge’s spokesman, the company is working busily to find a cause of problems and repair it as soon as possible to ensure the safe restart. On Sunday, two inspectors of the U.S. Pipeline and Hazardous Materials Safety Administration (PHMSA) were present at the spill site. According to the source, all the oil had been cleaned up.

Damon Hill, the Pipeline and Hazardous Materials Safety Administration (PHMSA) spokesman, confirmed that all of the pooled oil had been cleaned up: “The line has been uncovered to begin removing the failed section and send it to a metallurgical lab for examination.” Enbridge has admitted that agents with the U.S. Environmental Protection Agency (EPA) and the Wisconsin Department of Natural Resources are also on spot of the spill.

The recent oil spill appeared to be quite small; however it took place during fragile times for the Enbridge. The company had similar spill-tied issues in Alberta, Canada, last month. Moreover U.S. safety regulators published its report on Enbridge managing the Michigan incident in 2010. The company was fined $3.7 million for the Michigan spill.

However Enbridge has faced some difficulties, it still plans to expand its business. The company’s official announced multibillion dollar projects aimed at moving western Canada and North Dakota oil to Eastern refineries and eliminating expensive bottlenecks in the U.S. Midwest. But the U.S. Representative Ed Markey, the top Democrat on the Natural Resources Committee, noted: “Enbridge is fast becoming to the Midwest what BP was to the Gulf of Mexico, posing troubling risks to the environment.”

According to Geraldine Thomas-Flurer, an organizer from the first nations Yinka Dene Alliance, the company thinks that all their procedures and doings are at the highest level. But Geraldine Thomas-Flurer said: “Enbridge isn’t as perfect as they think they are.” She added: “They’re saying that they don’t have any spills — everything that’s happening now is proving that we’re making the right decision here in B.C. when we’re saying that this is a dangerous project that is putting our citizens, our water and our economy at risk.