Electrical Therapies Will Be Used To Treat Deadly Diseases 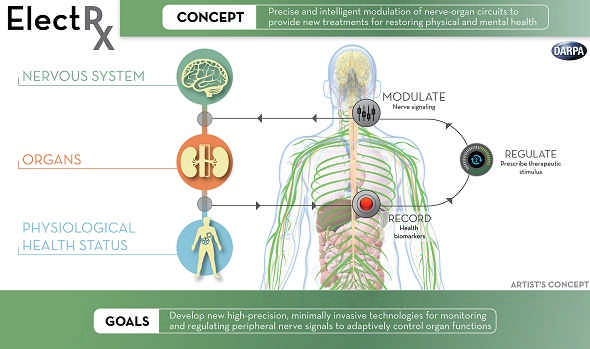 Envision a world where our deadly diseases are treated using electrical therapies, rather than pills or chemo. The reality is very near to us, as recently scientists have discovered that people dealing with deadly diseases will be treated well by using electronic systems.

Generally, human’s nervous system sends signals to tissues or organs to ease irritation – phenomenon called as the inflammatory reflex. However, in some cases, our nervous system escapes from whack, and can even result in illnesses like inflammatory bowel, and rheumatoid arthritis diseases.

Generally, doctors have treated these ailments using medications intended to stifle inflammation, for example, infliximab (trade name Remicade) oradalimumab (Humira). Yet, these medications are expensive. Besides, they don’t work for everybody, and often accompany with nasty side effects, and at times, albeit infrequently, they can even kill.

Presently, a few scientists have figured out how to deliver an electrical stimulation to simply the right areas to halt chronic inflammation in its tracks – a treatment they’re calling bio-electronic medicine.

In the same way many extraordinary innovations in science, this one came as eureka. Neurosurgeon Kevin Tracey, CEO and president of the Feinstein Institute for Medical Research in Manhasset (New York), along with his partners were researching a chemical, which blocked inflammation in the human brain. They discovered this, when it additionally decreased inflammation in the spleen and different organs of the human body.

Tracey told that at that moment, they didn’t understood how the brain could be engaging with the immune system. Ultimately, it turned out that the body has an inflammatory reflex, which controls how they react to infection or injury. Furthermore; when the body detects an infection or injury; the brain is advised through the vagus nerve that transfers data from the lungs, heart, and other abdominal organs. However, it’s a two-way approach – The brain likewise sends electrical signals by means of the vagus nerve to the organs, cramping down the production of inflammatory molecules. But, diseases like rheumatoid joint inflammation, these signals stop working effectively.

Tracey and his partners have figured out how to restore those signals by embedding small electronic devices, which can deploy targeted electrical shocks to the vagus nerve. The electrical treatment is being tested for a few diseases.

A company Tracey established, called Set Point Medical, has led clinical trials of this innovation in Europe for treating rheumatoid joint pain, and the outcomes have been promising. However, is the stimulation treating the cause for the disease, or just the side effects? Tracey said that possibly both; in a very short period the researchers will come to know after scrutinizing a few more studies.

Scientist like Tracey’s has inspired more extensive interest for bio-electronic drug. The US military’s research, and development branch, the Defense Advanced Research Projects Agency (DARPA), presented a program in fall of a year ago called ElectRx to fund research on electrical treatments for different ailments.

Doug Weber, a DARPA program manager and bioengineer at the University of Pittsburgh told that the ElectRx program is aimed to make it simpler to deliver the electrical stimulation in a manner that is both minimally invasive and accurately targeted.

This sort of treatment still has far way to go before it’s widely used in nations. Today’s therapeutic devices are pretty blunt, and pique, comprising of large electrodes, which fortify a whole nerve, when you might only need to focus on a small portion of nerve fibers.

We need to have the ability to identify particularly those fibers for therapeutic benefit, and have the technology to focus on those fibers directly, as stated by Weber.

Beyond funding devices, which would treat disease, DARPA said that they additionally plan to fund projects that are intended to constantly screening the human body, and potentially identify disease.

A month ago, Weber said that DARPA opted for the ElectRx proposals, where it plans to fund, and is presently finalizing the agreement. The project will formally commence in October.