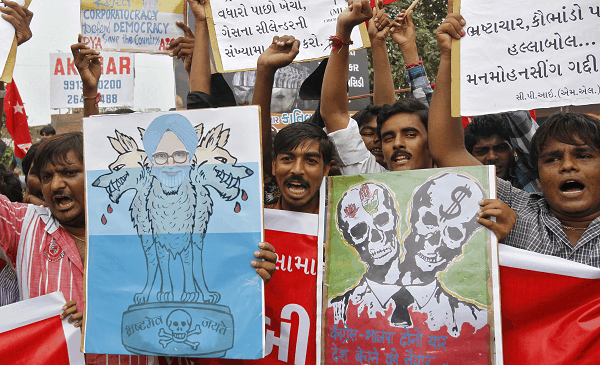 Strike in India on the 20th of September

Educational institutions, businesses and offices of the government remained closed in several parts of India on 20th of September due to protestors blocking trains and roads as part of a nationwide strike which lasted for one day. The strike was planned against the sweeping India economic reforms in the financial system of the country which had been declared by the government only the week before.

Spread of the Strike

The strike was primarily called by the major Indian opposition parties BJP or Bharatiya Janata Party as well as a few smaller parties hailing from both the political right and left wings. They protested strongly against a 14 percent rise in the price of heavily subsidized diesel oil. The decision taken by the India government reforms to open the doors of the country to foreign supermarket franchises investing in India was also the subject of harsh criticism.

The measures were considered to be related to a package of India economic reforms which were implemented to improve the state of the economy which has been exhibiting signs of slowing down rapidly. However, the same measures have now triggered a large scale political fury. The largest and most staunch ally of the Indian Prime Minister, Manmohan Singh, was the Trinamool Congress Party. But the group stated that it would leave the coalition on 21st of September if the government reforms had not been subjected to reversal by then. The uproar caused by this incident has increased the risk of a premature election.

Singh was urged by the Confederation of Indian Industry not to submit to force, stating that the government reforms which had been demanded for a long time by leaders of the business industry, were important for the development of the economy. The CII stated that good economics could rarely be equated with good politics. The institution also claimed that the one-day strike had resulted in the economy losing $2.3 billion in trade and lost production.

No mention was made of how they arrived at the figure but thousands of owners of stores, fearing that the India economic reforms in retail will drive them out of business, were believed to have remain closed for the day in protest. Large scale corporations either gave staff the day off or gave them permission to work from home.

Effect of the Strike

India’s outsourcing and IT hub, Bangalore, which is usually a bustling city, had a deserted look about it as shops and offices shut down and even public transport did not resume its activities. In the country’s economic capital Mumbai, however, offices and banks were open like normal.

All throughout the country, morning commuters were left in trouble as they were stranded at different train stations along with bus stops as protestors of Indian opposition parties refused to budge from railway tracks and even attacked bus depots. People in support of the BJP and even other Indian opposition parties burned Singh’s effigies and obstructed roads with the aid of burning tyres.

Some of the protestors of the Indian opposition parties hold the opinion that if they do not protest against the India economic reforms at the moment, the central government reforms are likely to remove the middle-class and poor families. Hyderabad too reported shutdowns of banks, offices, schools and businesses.

Two tweets were posted using NFT artist Beeple’s account. The first one promoted an exclusive collection with Louis Vuitton. The second tweet announced that Beeple would soon rel
50 mins ago