Jerome Powell talked of a changed economic world post-pandemic and that the road to coronavirus recovery was long.

A virtual panel discussion at the European Central Bank’s Forum on Central Banking had the globe’s top central banks’ executives applauding the latest news of the vaccine progress, but they were also cautious and said the world economy continues to need help.

The U.S. Federal Reserve Chair Jerome Powell said that the U.S. Congress “may have to do more” to cushion the blow from the pandemic.

He said news about the vaccine was “certainly good for the medium term” but that it was “too soon to assess the implications for the path of the economy, especially in the near term. And I would say that with the virus spreading, the next few months could be challenging.”

Powell said that the pandemic had played havoc with the economy, and the road to recovery would be long, and the economy as we know it may be a thing of the past. 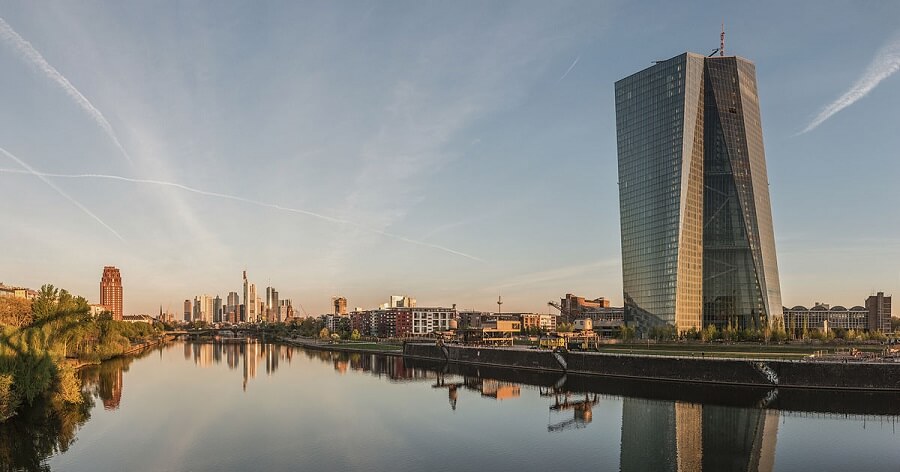 The Seat of the European Central Bank and Frankfurt Skyline at dawn, as seen from west.

“We’re recovering, but to a different economy,” Powell said during the panel discussion.

The pandemic has pushed the economy to turn increasingly to technological options like telework and automation. This will change the way people work and operate in the financial world, too, he said.

Jerome Powell said that it will take time for the markets to adjust to this new normal, and in the long term, it will have a positive effect, but for the short-term, it will disrupt the workings of the financial world as people take time to adjust and the progress is uneven.

He said that people in the low wage category and customer interaction fields like hospitality and retail will bear the burden. Even in this group, which sees more women employees and minorities, it will be doubly hard for them.

He said more women had been affected due to job losses during the pandemic. Many have been forced to quit due to childcare responsibilities. Generally speaking, the inequality holds the economy back, the central banker said.

“Even after the unemployment rate goes down and there’s a vaccine, there’s going to be a probably substantial group of workers who are going to need support as they’re finding their way in the post-pandemic economy, because it’s going to be different in some fundamental ways,” Powell said.

A multi-trillion-dollar stimulus package launched in early March has since expired, leaving millions of Americans without support. Squabbling among politicians and party politics over a consensus over another stimulus has left things at a standstill.

Economists are hopeful that the new administration, as soon as it takes over, will be able to pass another stimulus bill.

Powell, who it is believed will continue in his position in the next regime change, has maintained the need for a new package to aid the ailing economy.

“My sense is that we will need to do more and that Congress will need to do more,” he said. “The main risk we see today […] is the further spread of disease here in the United States,” he said. The resurgence of the virus in the winters has led to some states reconsidering some restrictions and curbs to activities.

Christine Lagarde, president of the ECB, said central banks and governments would need to continue to provide support to “help bridge over to the other side of the river” to avoid long-lasting damage to the economy. “I don’t want to be exuberant about this vaccination,” she said.

Lagarde said there is “little doubt” the central bank for the 19 countries that use the euro would add more stimulus at its Dec. 10 meeting. Powell said that policymakers discussed whether and how their bond-buying program might be altered to provide more economic support. The Fed is buying $120 billion a month in bonds — $80 billion in Treasurys and $40 billion in mortgage bonds — to try to keep long-term borrowing costs low.

Powell’s sobering comments put a damper on US stocks after it saw a rally following the Pfizer vaccine news.

Anna Domanska
Anna Domanska is an Industry Leaders Magazine author possessing wide-range of knowledge for Business News. She is an avid reader and writer of Business and CEO Magazines and a rigorous follower of Business Leaders.
« Alphabet’s X rolls out high-speed internet in Africa in partnership with Econet
Women in Business: An Interview with Malai’s Pooja Bavishi »
Leave a Comment
Close