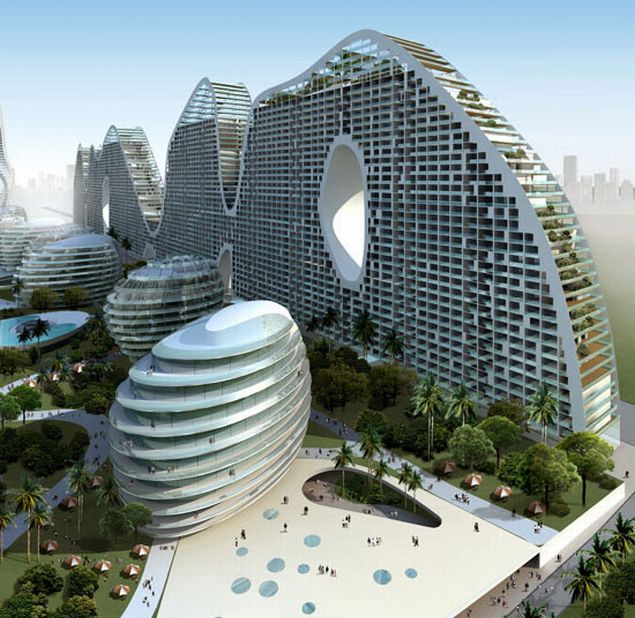 This Chinese firm, with its “MAD”-ly distinct sustainable building designs has managed to carve a niche for itself for sure.

The Fake Hills project is being developed on a long narrow waterfront site in Beihai.

Becoming an un-missable landmark for the city, while also providing a high-density housing solution, the Fake Hills derive their conceptual structure from traditional Chinese architecture’s intrigue with nature. Instead of being situated amidst a brilliantly manicured lawn (as one often sees with large landmark developments) the structure of the development manifests itself as a man-made version of naturally contoured land, becoming fake hills with little homes all over for inhabitants.

According to MAD Architects, the design concept for Fake Hills aimed at bringing together two typologies that most commonly define residential developments in China: high rise towers and long, low rise blocks, creating an awe-inspiring structure with an undulating roof, long slab and circular openings.

The design solution is produced by cutting into the slab and creating a sculpted form obviously referential to the shape of the hills – a landscape that dominates the surrounding area, while cutting through the structure all along the development allows views for the homes and also lets light and air flow through the structure.

This specific mix of elements maximizes the ocean-views for the residents, while the entire composition forms a colossal transition between the waterfront and the land behind it.

How Green will the Fake Hills be ? 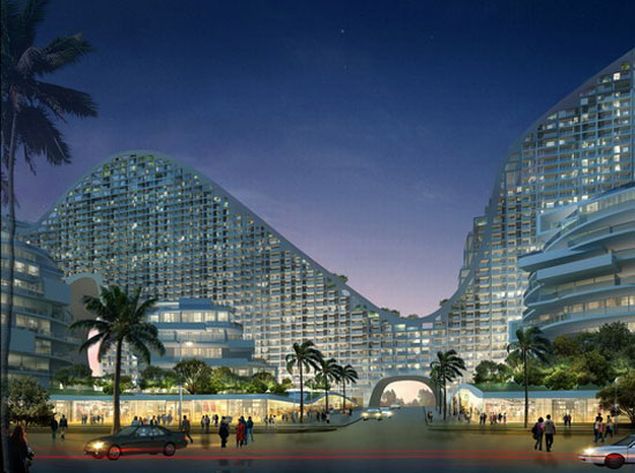 Presenting itself as a single monolithic wall, the Fake Hills project promises equal solar exposure to all apartments built within, hence maximizing the flow of natural light in the buildings. The architects claim that this will significantly reduce consumption of energy in the development.

Effective ventilation is facilitated by openings in the structure as well as undulations in the roofline which while allowing light to penetrate through the building all across the development, also help underplay the overwhelming scale of the building a wee bit.

The almost-half-million sq. mt. development is capped by a series of green roof-gardens all along the various levels of the development, towards ensuring cleaner air in the surrounding area, while also regulating the interior temperature.

Awarded the Architectural League Young Architects Award in 2006, MAD develops their designs on unique futuristic concepts by persistently exploring the intersections of the hi-tech world with nature.