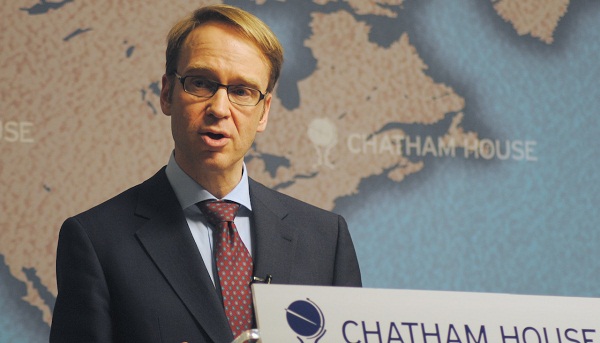 Jens Weidmann, the chief of the German Central Bank is presently engaged in a progressively intense and high stakes fight involving the response of the ECB policy towards the ongoing crisis in the euro zone with Mario Draghi, the President of the European Central Bank.

Events Leading Up to the Big Showdown

The struggle began on Thursday after Draghi implied that the European Central Bank could once more intercede in debt markets so that the crippling debt costs troubling Italy and Spain could be diminished. However, Draghi was careful not to announce any definite measures. It was only last week that he made a promise to safeguard the euro and added that the central bank would adopt any means necessary to achieve this course of action. The statement served to increase hopes of action as early as this week. It even set off a round of meetings and phone calls between executives who are in the run up to Thursday’s assembly of the European Central Bank Governing Council. There are altogether 23 associates including the Executive Board and the 17 national central bank bosses comprising of six members who collectively develop ECB policy.

But the central bank of the principal financial system in Europe, the mighty Bundesbank, seems to be sternly against the method of fresh ECB bond buying based on the view that it amounts to economic sponsorship of governments, which is in direct contrast to European law.

The usually polite Weidmann serves as the official successor to Axel Weber who had submitted his resignation as a sign of protest over the initial round of bond buying. He is looking to draw on his former diplomatic knowledge as he reins Draghi in and, at the same time, attempts to put a stop to his own isolation. 44 year old Weidmann had spent quite a bit of his formative years in Central Africa, working at the National Bank of Rwanda. He had also received his formal education in France. After that, he had secured a post at the International Monetary Fund (IMF). He also has the honour of having served as the chief economics adviser to Angela Merkel, the German Chancellor. All these experiences helped to hone his gentle diplomatic abilities which proved useful in establishing his identity as being different from that of Weber. Weidmann himself seems to have no intention of following the footsteps left by his predecessor.

European Central Bank board member Joerg Asmussen happens to be a former batchmate of Weidmann and had even worked in close association with him in Berlin. He is also an ex-German deputy finance minister. He acted as a go-between trying to get Draghi and the Bundesbank chief to sort out their differences over the course of the weekend. But a point of resolution had still not been agreed upon by the time the two later met on Monday.

When the Council meeting was concluded, Draghi told the international media that ECB’s support on practicing the bond-buying was settled despite Weidmann’s doubts. However, according to two sources affiliated with the central bank, no formal vote had been cast at Thursday’s assembly and Draghi was simply attempting to separate Weidmann.