One of UK’s largest electricity and gas suppliers, E.ON has inked a deal with US tech giant Google to power its transition to renewable energy. During the initial phase, E.ON will introduce Google’s solar platform Sunroof in Germany, the first for Sunroof to be offered outside of the US.

First introduced in 2015, the platform is used by homeowners to access the solar potential of their roofs. Sunroof helps homeowners calculate savings from installing solar panels on the roof. The platform uses Google Earth to analyze the dimension and inclination of the roof, local weather patterns and the degree of solar radiation to determine how much sunlight a home receives each year.

As of now, the Sunroof platform covers roughly seven million buildings in heavily populated areas in Berlin, Munich, Rhine-Main and the Ruhr Area. With the help of the deal, E.ON and Google are planning to expand the platform’s capacity to the rest of the country. 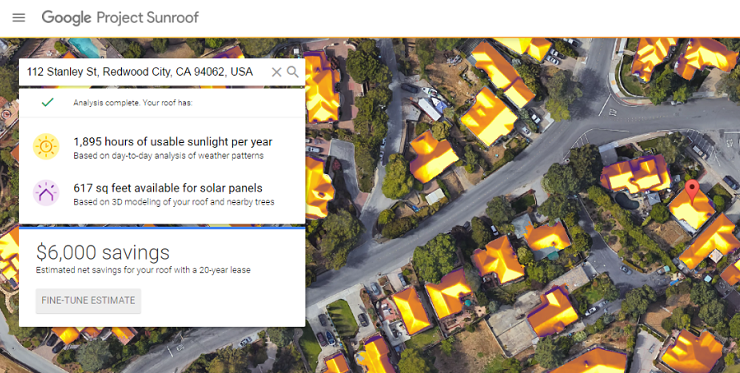 Software provider Tetraeder will also join forced with E.ON and Google. Tetraeder.solar is an international engineering firm based in Dortmund, Germany. The company develops its own software and participates in R&D projects, and specializes in processing large amounts of spatial-related data.

Project Sunroof data will be integrated with E.ON’s website, allowing people to make an informed decision about the potential for solar installations. In addition, E.ON released there is scope to extend the tool across other European markets, as well as the UK.

In April 2017, E.ON announced the launch of its UK-residential PV and solar-plus-storage solutions and battery and energy management system installations to consumers. The price ranges between £5,000 and £7,500, with various guarantees over performance and savings on offer. While in March this year, it outlined its ambition to be an industry leader in the solar energy market, which will reflect on its future products and services.

Presently, the Google Sunroof platform is covering approximately 60 million buildings. Around 70% of the roofs covered by the platform were suitable for installation of a solar power generator. In sunny states like California and Florida in the southern US, it has reached 90% of homes. Houston, Texas has the maximum potential out of any US city, with an estimated 18,940 gigawatts-hours (GWh) of rooftop solar generation potential year. New York, Phoenix, Los Angeles and San Antonio follow Houston for the top five solar potential cities in the US.

Anna Domanska
Anna Domanska is an Industry Leaders Magazine author possessing wide-range of knowledge for Business News. She is an avid reader and writer of Business and CEO Magazines and a rigorous follower of Business Leaders.
« Why the Apple Watch Badly Needs a Breakthrough App
Musk’s Next Target with SpaceX Satellite Internet – Earth’s Orbit »
Leave a Comment
Close