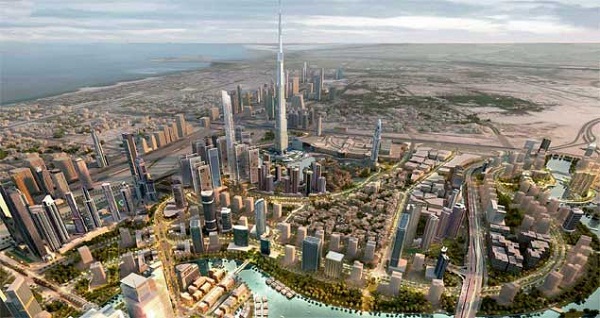 Dubai aims high as it has announced its plans to build the world’s biggest shopping mall and tallest hotel, not to mention gardens that are said to be larger than London’s Hyde Park. Dubai revives its property projects which have been postponed due to the global financial crisis.  And it is not surprising that Dubai wants everything to be big as it always aims at showing off. So its big comeback is not unexpectedly revolving around the business of biggest.

The recently renewed property plans of Dubai, which were downsized due to the debt crisis, are aimed at creating a new tourism-retail hub which will lure money as well as more tourists to Dubai.

The plan for a “new city within Dubai” has been revealed by Sheikh Mohammed bin Rashid al-Maktoum and it seems that Dubai is back in the game. The new city is to be called “Mohammed bin Rashid City” and according to an announcement, Dubai Holding LLC and Emaar Properties PJSC will be working together on the ambitious project. The adumbration of the construction of the world’s biggest shopping mall as well as the scheduled opening of the world’s tallest hotel should not amaze anyone as Dubai is known for its fondness for upscale and “the biggest” buildings in the world, just to mention Dubai Mall, touted as the world’s biggest shopping and entertainment destination, and the world’s tallest skyscraper, Burj Khalifa, or the world’s largest dancing fountain shoots water 50 stories high.

“Mohammed bin Rashid City” is to include approximately 100 hotels, residential areas, the “Mall of the World” and park which is planned to be roughly 30 percent larger than London’s Hyde Park.

To underline the scale of the project of the “Mall of the World”, which is to be the world’s biggest shopping mall, the attention must to be drawn to the fact that the mall will host as many as 80 million visitors per year. This new project is planned to be partly developed by Universal Studios. In 2008, a plan for Dubailand was announced and according to the details, a Universal Studios theme park was to be included in it. However the plan was postponed due to the global financial crisis. To date it has not been revealed whether the initial design of the Universal Studios theme park will be included in the “Mall of the World” project or not.

It has been underlined that “Mohammed bin Rashid City” is planned to be connected with both Business Bay and Downtown Dubai by the alley full of art galleries. According to plans, the “Mohammed bin Rashid City” is to include the biggest group of art galleries in the Middle East and North Africa as well.  The project of the new city is mainly divided into four main components:

Yet it has not been made public how much the project of “Mohammed bin Rashid City”, which included the world’s biggest shopping mall, is going to cost.

The latest figures showed that Dubai’s tourism rose by approximately 13 percent a year, with hotel occupancy reaching over 80 percent in 2011. Sheikh Mohammed underlined the importance of the development, adding: “The current facilities available in Dubai need to be scaled up in line with the future ambitions for the city.”

These days Dubai is seeking new ways of stimulating its economy and projects, which were postponed due to the global financial crisis, seem to be perfect to achieve it. In addition, officials aim at transforming Dubai into a tourism and commercial hub as they think it is a way to progress and development.

Dubai’s plans do not only concentrate on the development of “Mohammed bin Rashid City” with the world’s biggest shopping mall. Back in October, Dubai announced its plans for a huge replica of the India’s Taj Mahal which is to be high-end wedding venue. The construction of “the bigger” and “better” version of the Taj Mahal is said to cost over $1 billion.

The new Taj Mahal, which is to be called the Taj Arabia, will only have the identical façade to one of the India’s Taj Mahal. The wedding venue will be able to cater approximately 3,000 guests, not to mention that the Taj Arabia will include also a five-star hotel, residential areas as well as retail space.