Drive on the World’s First Solar Panel Road in France

Solar panels have become a common way of extracting energy these days. This is because the world is becoming aware of the adverse effects of fossil fuels. Due to this, various countries are searching for alternative sources of energy without harming the environment. Solar energy is a great way to do so. There are a number of structures which create solar energy by absorbing the sun rays from the atmosphere. The first solar panel road set up in France is the latest development in the field of renewable energy.

The world’s first solar panel road has been set up the village of Tourouvre-au-Perche in Normandy, France. The new technology takes solar panels from roofs to the roads. This road is officially open in this small village and is one kilometer long. Even though the town of Normandy does not have an abundant amount of sunshine, the officials are willing to test this renewable energy structure here. It was inaugurated on 22nd December by the French Ecology Minister, Ségolène Royal.

This one-kilometer route covered by solar panels has been dubbed the “Wattway”. The French Ministry of Environment funded this project. The organization took this step to test whether the implementation on a large scale is effective or not. The electricity generated through this project will supply power to the streetlights of this town. A test on these panels was at four car parks across France before the official inauguration of this solar energy road. The head of this project’s construction was Colas, who is a part of the giant telecoms group Bouygues. 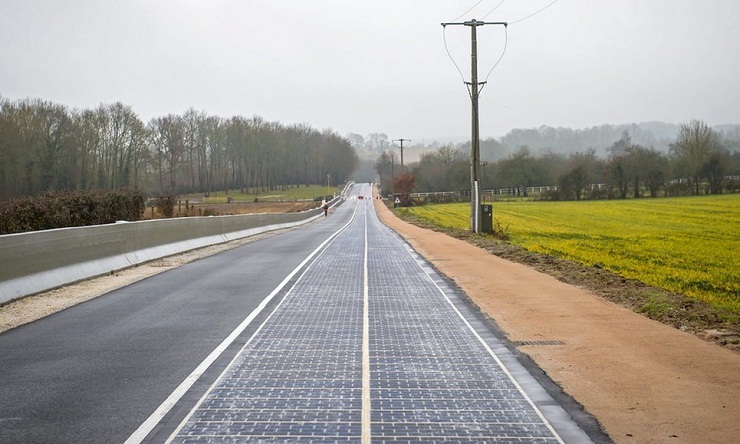 The world’s first solar panel road is in France.

2,800 square meters of electricity-generating panels covers the solar panel road. These panels have a protective layer of resin which consists of five sheets of silicon. This layer is in order to avoid any kind of harm done to the solar panels. The sheets will help to withstand the automobiles driving on this road and ensure good grip between the road and the tyres.

During the testing period of two years, around 5,000 motorists can use this road per day. This will generate renewable energy at an average of 767 kilowatt-hours on a daily basis. This amount of energy is enough to light up all the streetlights of the town.

This project is mainly a part of the biggest project declared by the French Ecology Minister, Royal. Royal states that in the next five years, he aims to see solar panels installed in 1,000 kilometers of roads in the country. Currently, France has a total of one million kilometers of roads. The cost of the project funded by the French Ministry of Environment is estimated to be around $5.2 million. The French ecology officials consider the development of solar panel roads the next step in ecological development.