Dreaming to be Iron Man! Here’s Audi R8 e-tron, the all-electric and driverless supercar of the future 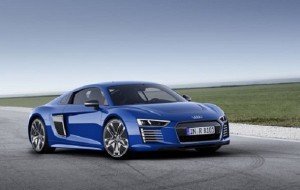 Audi debuts its Audi R8 e-tron, the all-electric and driverless supercar of the future.

Dreaming to be a real Iron Man, Audi debuts its Audi R8 e-tron, the all-electric and driverless supercar of the future. Back in march, the Audi R8 e-tron was introduced, catching a lot of attention of viewers. The new model of Audi was unveiled on stage at Audi’s pre-show keynote, demonstrating it in a driverless form, at CES Asia 2015, in Shanghai.

Audi’s CEO, Rupert Stadler and his top-level executives introduced their model on stage and detailed about their plans to put smart technology in the driving seat.

Audi coyly calls the new model – “piloted driving model”, but its driverless supercar that while driving the car on the streets, it has to have a human behind the wheels for the time being. But, this doesn’t halt Audi R8 from moving on streets like Knightrider.

The Audi R8 e-tron’s model is a fine supercar -top to tip, with a finished color-body in blue, with carbon fiber sections and illuminated orange side panels. It is a marvelous combination of materials and designs. It has a 456bhp engine that can hit the 62mph mark in just 3.9 sec. It’s all-electric fully loaded with power engine, with a maximum range of 280 miles. It is priced at USD 250,000.

For Audi lovers, if they choose to drop a huge amount on buying such an expensive car for enjoying a plentiful taste to drive afar with the Combines Charging System- a full battery recharge in less than two hours, with a stunner body looks.

Audi’s pilotless-driving system is configured with multiple sensors that use cameras for a 360 degree view along with lidar, radar, Photo mix detector and lot of artificial intelligence processing means there is a least possibility of car crash.

According to CES 2015, Audi is heavily investing on R&D innovation. The first series of Audi’s production is set to be on track by 2017, to feature autonomous smart technology will be a next-generation of A8.