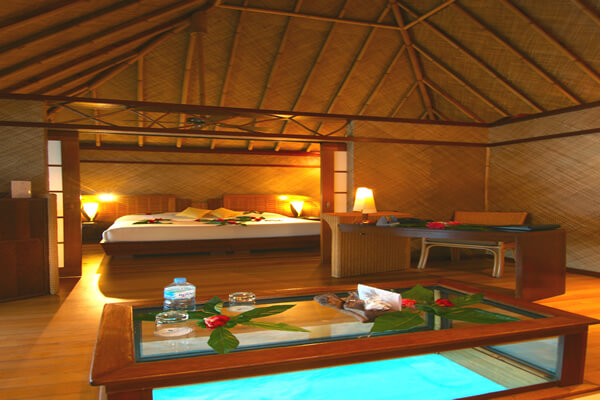 Bora Bora Island, considered one of the most mysterious and romantic islands on the planet given the legends associated with the mystical words “Bora Bora”, might soon also be famous for the green innovations being integrated with their hotels and resorts.

And what better way to spread the message of green is cool, than to integrate green with luxury !

Fuel costs in Bora Bora, like a number of other islands, are incredibly high. This, combined with the persistent warm temperatures on the island, has forced the owners of the Intercontinental Hotel in Bora Bora to figure out an alternative way of providing air conditioning to its remote, luxury, oceanfront hotel.

Bora Bora’s initiative echoes the green proposal drafted by Honolulu in 2009, which will mean that more than half of the buildings in Honolulu’s skyscraper-studded downtown will be cooled by ocean water pumped from the deep by 2012.

Green is Hip ? Say that again !

The project, once implemented, will mean massive money-saving for building owners, and equally drastic greenhouse gas emissions reductions, according to an environmental impact statement published in fall 2009.

While this technology is already used in Toronto and Stockholm to balance temperatures inside large buildings, notably to cool areas with computer servers and telephone exchanges during the summer months, Honolulu will become the first warm-climate city to use deep sea water at such a large scale to cool its buildings.

Naturally, William M. Mahlum, president of Honolulu Seawater Air Conditioning LLC, which is undertaking the $240 million project was concerned “This is the ﬁrst time it will be used to cool a warm-weather city center.”

The company, owned by investors in Hawaii, Sweden, and Minnesota, is managed by Renewable Energy Innovations, a unit of Ever-Green Energy Co. of St. Paul, Minn.

The first 40 buildings using this cooling technology are expected to come on-line in late 2012, with another ﬁve to be added the following year to reach maximum capacity of 28,000 tons.

Once the system is up and running, predicts Mahlum, it should inspire tropical coastal cities around the world to harness the technology. “We know this could work in Miami, Acapulco, and a lot of other coastal cities,” he said. “All you need is a steep enough coastal gradient and concentrated demand.”

Mahlum said in a report that in real terms the system will save its clients about 20% in cooling costs, by reducing power use by 77 million kilowatt hours per year, or 75%, while reducing CO2 emissions by 84,000 tons, NOx by 169 tons, and sulfur oxides by 165 tons per year.

“Most green-energy projects focus on generating clean electrons,” says Jeff Mikulina, head of the Blue Planet Foundation, which promotes clean energy. “The beauty of this one is that it avoids electrons altogether by tapping into a vast local resource.”

The system involves a ﬁve-foot-wide pipe extending four miles out to sea to a depth of 1700 feet, bringing in 44,000 gallons per minute of water at 45 °F. Once ashore, the water goes through a conventionally powered chiller that brings its temperature down to exactly 44°F, then loops through a heat exchanger with a closed-circuit freshwater system, and is released back into the sea at a depth of 200 feet at 56 °Fs the natural temperature at that depth.

Meanwhile, the cooled freshwater makes its way to the buildings’ air-conditioning units, and cools air passing over the coils in front of the fans. This allows the building to turn off the energy-hungry compressor that previously chilled the coil and the cooling towers.

Hawaii sees a surge in the demand for power in the middle of the day, driven by air-conditioning use, so this approach saves not only power, but premium power, notes Mikulina. “This project will help relieve some strain on the power grid.”

The system does not warm the ocean, says the company’s vice-president for engineering, Ingvar Larsson. “If you look at the heat we emit in both the ocean and the atmosphere, it’s 40% less than a conventional air-conditioning system, and of course, by cutting greenhouse gases, we slow global warming.”

Peter Rosegg, a Hawaiian Electric Company spokesman, has nothing but praise for the project. “By reducing our load, it allows [us] to increase our reliability to other customers,” he says. “The next logical step would be [to add] Waikiki, the tourism-oriented part of the city, where 40% of the power use is taken up by air conditioning.”

Honolulu Seawater Air Conditioning ofﬁcials conﬁrm that once the current project is ﬁnished, they expect to create another unit, with its own pipe into the ocean, in Waikiki; that project would take another ﬁve years.

It’s not surprising this came about in Hawaii. On the Big Island in 1974, the Natural Energy Laboratory of Hawaii Authority did the ﬁrst U.S. tests of ocean thermal energy conversion to see if temperature differences between the deep and the surface could be turned into electricity economically. The answer was “not yet,” but as a sideline, the laboratory created the world’s ﬁrst air-conditioning system to use cold seawater pumped in from the deep.

Aon Plc and Willis Towers Watson have agreed to sell $3.6 billion worth of assets to rival Arthur J. Gallagher & Co. in a bid to appease European competition regulators over th
13 hours ago