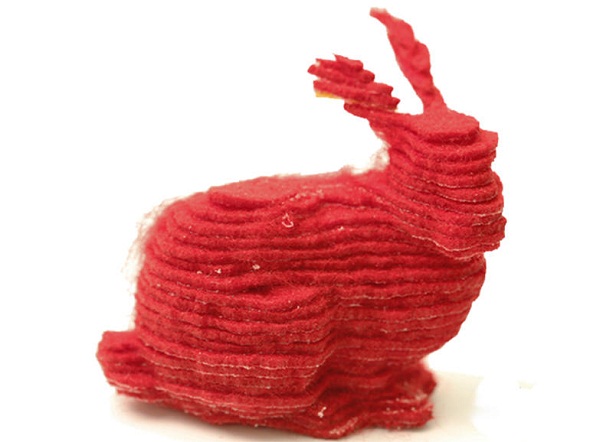 Disney’s approach uses a very different method in which the fabric is cut into pieces.

3D printers have been pouring into the market, since the last several years. However, older models used plastic instead of other flexible materials like fabric and the objects printed were rigid and hard.

Well as it turns out now, 3D printed objects from fabrics could be the future of 3D printing.

A team from Disney’s research lab has partnered with the researchers from Carnegie Mellon University to build a 3-D printer that layers together laser-cut sheets of fabric to form soft, cuddly and fluffy objects such as doll clothing, bunnies and phone cases.

Disney’s 3D printer is quite unique in comparison to most other printers. It’s neither an extruding melting material like a Makerbot nor a blasting a tub of goo with UV light to harden it like the Form 1. The new 3D printer is much similar to a laser cutter.

Normally 3D printing is done with the creation of a device or object with a hard material. The most common of these is Makerbot that is a melted material solidified so it maintains its structure.

Disney’s approach uses a very different method in which the fabric is cut into pieces. The printer cuts the layers in the shape of the object to be printed. Once these pieces are cut, they are then stacked together by adhesive and then heated to bind the layers together so they retain their shape.

While cutting, the layers taken are larger than the required size. These layers are then put together with heat sensitive adhesive. Once the layers are assembled, the object is heated and when the final product is ready those extra bits are cut by a laser to give the finishing touch.

The most important aspect is that the printer uses fabric layers and not plastic material like other 3D printers, the reason why the objects printed turn out very soft.

Disney Research co-author of the study accompanying the 3D printer James McCann said that the printer can create both soft and 3D objects with an astounding amount of precision.

However, the resolution of the print isn’t cardinal and the adhesive layers don’t look sturdy enough for children to toss around. Unlike other printers, this will not be built for home use any time soon. But products created in the Disney lab research are mostly meant for their own use.

McCann also said that the team responsible for the printer’s development has a number of innovations up its sleeves.